Significance of Nalanda and its Location

Nalanda was a great seat of learning from the time of Lord Buddha. Later on gradually the viharas took the form of a Mahavihara and attracted scholars from all over the world. The scholars from Nalanda Mahasangharama in 7th to 10th century were instrumental in spreading the teachings of Buddha in Himalayan kingdoms and the rest of the Southeast Asia. The University was the first of its kind and its set up influenced the foundation of many modern day educational institutions; Students of Nalanda didn’t have the need to go for collecting alms as their basic necessities of life were taken care by the royal patronages. There were around 100 to 200 villages dedicated by kings for its upkeep while the students focus on their education. The layout of the academy contained several various disciplines and the facilities provided were conducive for research and development. The academic units, Chaitya for worshiping, dormitories, laboratories, library and other amenities were all provided in one campus. 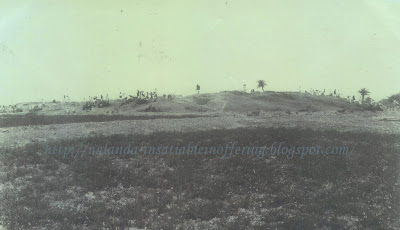 Fig- The Mound Of nalanda first seen by First explorers

In the 18th century when the area was under the scrutiny of various Archeologists the mound of the Bargaon as we they knew it then attracted the most attention. The mound spread in an area of more than 250 Acres of land and its size was a major appeal to many initial explorers.
The accounts left behind by many travelers who visited the area from 7th century through the 13th century give an insight about the humble beginning of the university and how successive kings’ continued patronages provided to make it one of the most revered institutions of its times. There were many monasteries in Indian subcontinent at the time but Nalanda was the most unique and the best among them all. It set an example for others to follow, an epitome of monastic system. The exchange and exploration of ideas and education that started during the times of the Buddha and reached its pinnacle at the time of Xuanzang the entire process of evolution of the Indian educational learning can be seen at Nalanda. It conjures up a picture of higher centre of learning; therefore it needs conservation and proper interpretation so that we can tell people the world what these seemingly inanimate structures represent. We can discover our strengths and the roots of present education arrangement that evolved from this system which reached its peak some 1500 years ago. Many Buddhist pilgrims visit these ruins as a place of worship as their preachers belonged to this place and spent much time studying here.
All the travelogues associate this place with Lord Buddha; all the big temples in the campus are to mark events associated with the life of Buddha. At the heart of the campus is a temple (temple number 3 as per ASI excavation records), this appears to be the Mulgandhkuti (as per the records of Xuanzang and Hwui Lun) where the Buddha stayed for three months for his annual Varsaka. Archaeological evidences and contemporary literary verification suggest that the university flourished from 5th century to 13th Century AD. Various subjects like theology, sabda-vidyâ (grammar), hetu-vidyâ (logic), astronomy, metaphysics, chikitsâ-vidyâ (medicine), philosophy and various schools of thoughts of Buddhism were taught here.
Besides being a hub of academic activities, art was also promoted by the university. Archaeological evidences suggest Nalanda was a centre of bronze casting, stone, terracotta and pottery work. It is believed that its foundries were spread in neighboring places. Beautiful bronze and terracotta work of the time that has been decorating the museums all over the world are the creation of Pala School of art which had its genesis in the Nalanda Mahasangharama.
The exposed ruins are an important place for the visitors who want to visualize how the Buddhist Sangha system developed in its earlier stages and progressed to its prominence. It gives the understanding of the various modes and methods of education in India of the time that trickled down into our subsequent educational institutions. The remains were deserted about 700 years ago and then buried under the earth for almost 500 years still the moments seem to be frozen in time and things are intact and the disarray of structure just resembles an ongoing renovation work. The exposed structure are a small part of a very large heritage still buried under hundred of villages and it should be respected for what it represents as if, it is telling us the saga of a magnificent past and vividly sharing it with all its visitors. The structure was patronized by the Gupta and the Pala rulers and the distinct style of art and architecture is visible throughout the campus, the beautiful pieces of stuccos, terracotta, metal work and various art form conglomerates to tell an exclusive story. This site is probably one of the best on site museum in world representing the Nalanda School of art and it needs patrons from the new ages to protect it and conserve the long lived traditions and maintain its authenticity. And it has been rightfully been nominated for the world heritage status.

Location - How to get there...

Nalanda is situated at 25°8’N Latitude and 85°26’ E Longitude. The Remains of Ancient Nalanda University is 90Km equidistant from Patna, Capital of Bihar and Bodh Gaya. Nalanda is well connected by road from both Patna and Bodh Gaya. Patna and Bodh Gaya has regular flights from most major cities. Nalanda is also well connected through the train transit system with the rest of India.
Temperature during winters (December- January) - 5° C to 20° C
Summers (April to July) -20° C to 40° C
Best time to visit- September to March
Posted by Deepak Anand at 7:15 PM