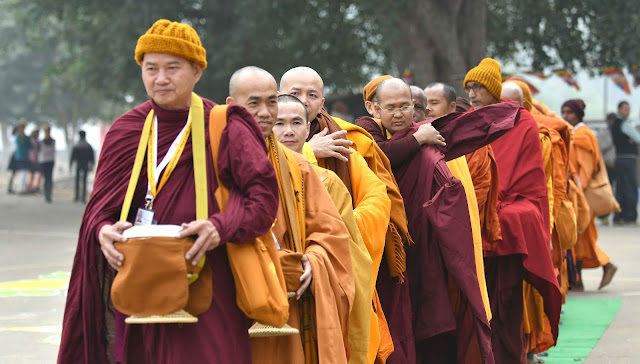 One of the important objectives of International Buddhist Confederation (IBC) is to organize Dhamma Walks along the Buddha trails to revive the ancient tradition of Cetiya Carika (a walking pilgrimage). The path through the valley connecting Rājgir with Jeṭhian (Laṭṭhivana, Yaṣṭhivana) was once an important pilgrimage path connecting very sacred Buddhist places like Indraśailaguhā (Pārwati), Rājagṛiha, Jeṭhian, Tapovana and Saṃbodhi (Bodhgayā).  IBC in collaboration with the Light of the Buddha Dhamma Foundation International (LBDFI) and other like minded institutions organized 3rd International Dhamma Walk from Jeṭhian to Rājgir on 13th December, 2016.  Objective of the Dhamma Walk was to facilitate awareness generation towards the 15km Jeṭhian - Rājgir Buddha trail.

More than 1500 Venerable monks, nuns and laity from 15 countries participated in the Dhamma Walk. An important highlight of the Dhamma Walk event was Saṅghadāna (food-offering to ven. monks and nuns). More than 200 Venerable monks and nuns from Thailand, Srilanka, Vietnam, Cambodia, Myanmar, Laos, Nepal, Indonesia, Malaysia, Japan and Taiwan with their alms bowl in their hands walked in the streets of the Jeṭhian village and collected food. 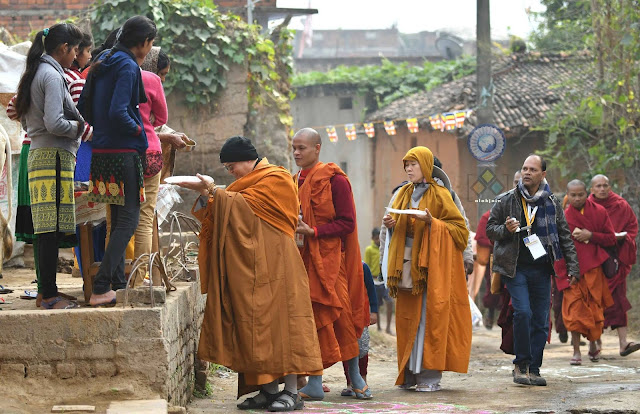 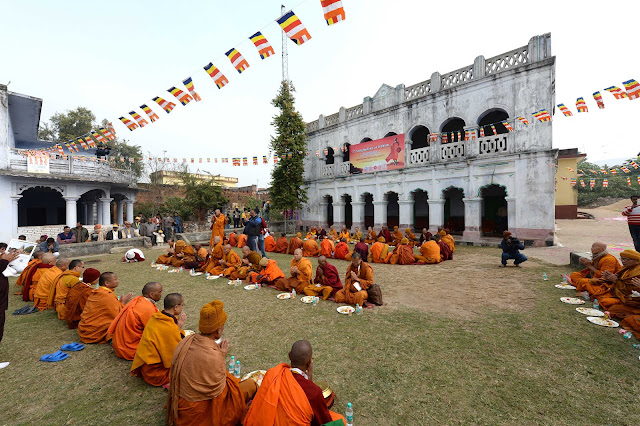 Assembly of the Participants of
Dhamma Walk


Walking in the Footsteps of the Buddha!! 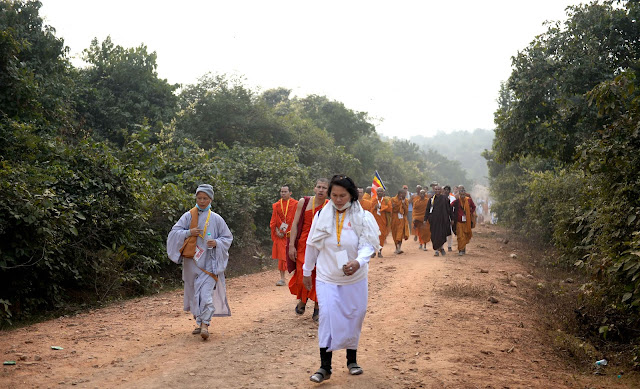 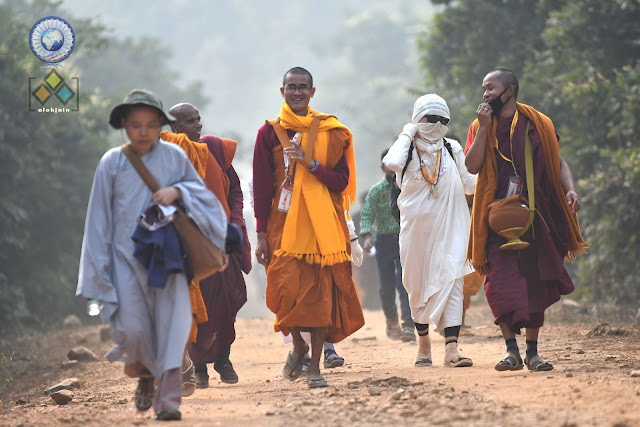 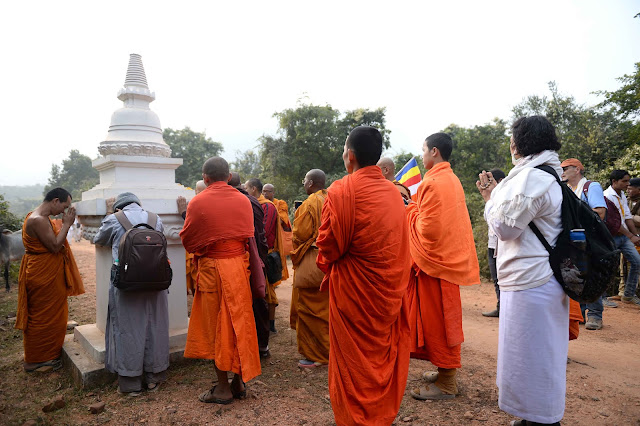 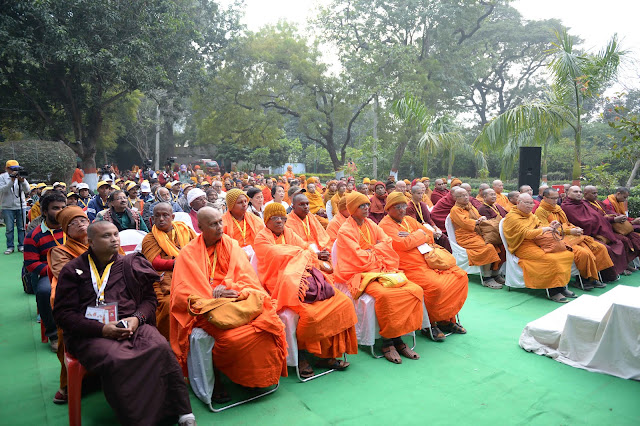 Greening the Buddha Valley (Jeṭhian Valley)
The Jeṭhian valley which was a dense forest at the time of the Buddha is now a barren land. IBC and LBDFI in collaboration with other like minded institutions like Earth Day Network plans to recreate the Jeṭhian valley as it was during the time of the Buddha. An important objective of the Dhamma Walk is also to motivate people to save trees and plant more trees in the Valley by spreading the importance of trees among people as well as reduce deforestation and cut down of trees. Earth Day Network distributed sapling of Tulsi tree among the people of Jeṭhian to promote reforestation. 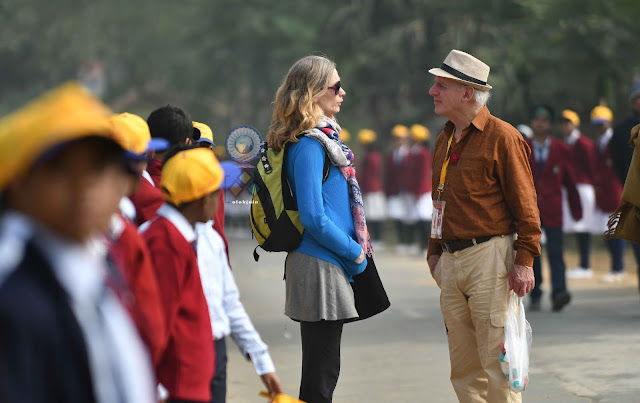 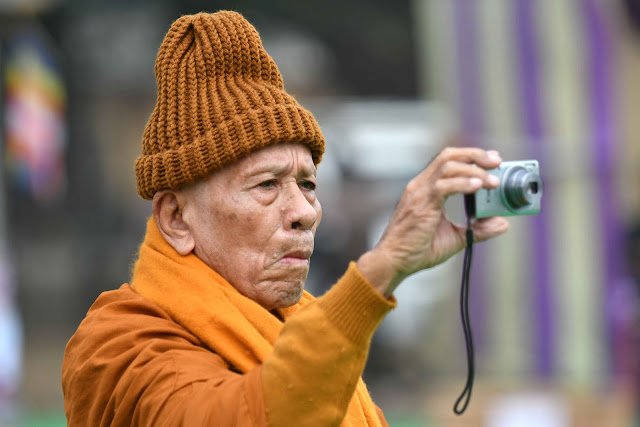 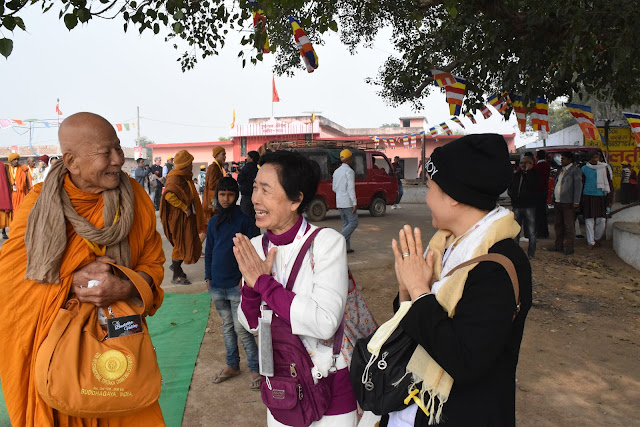 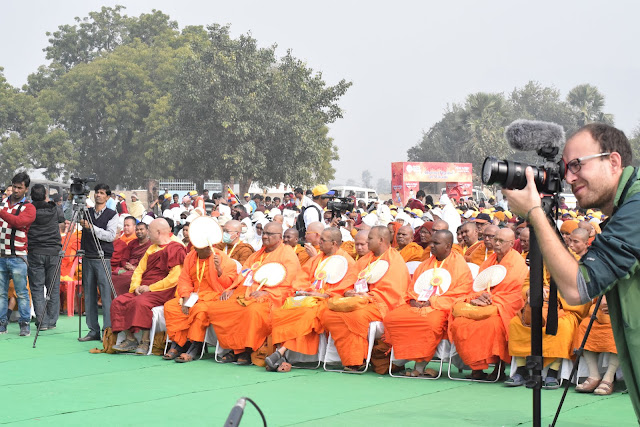 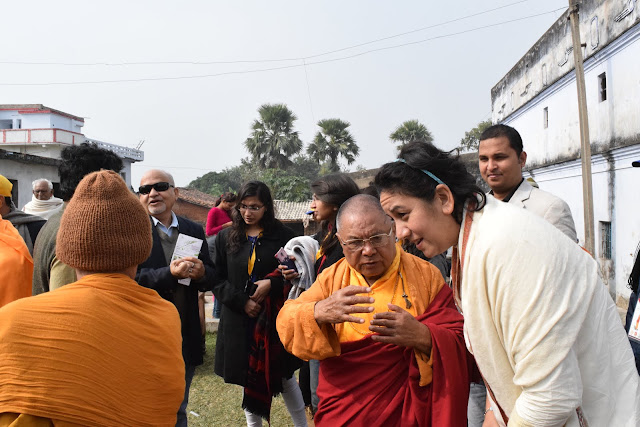 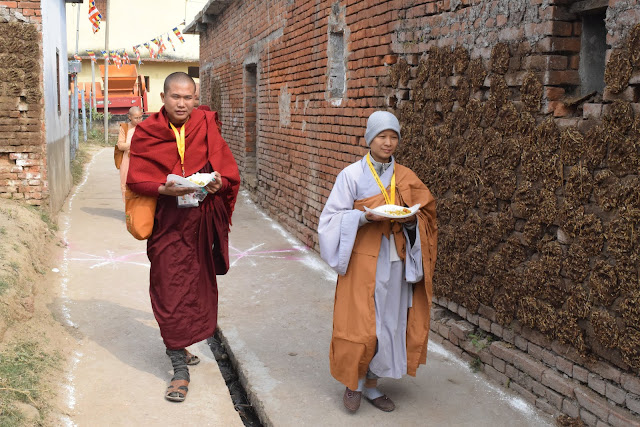 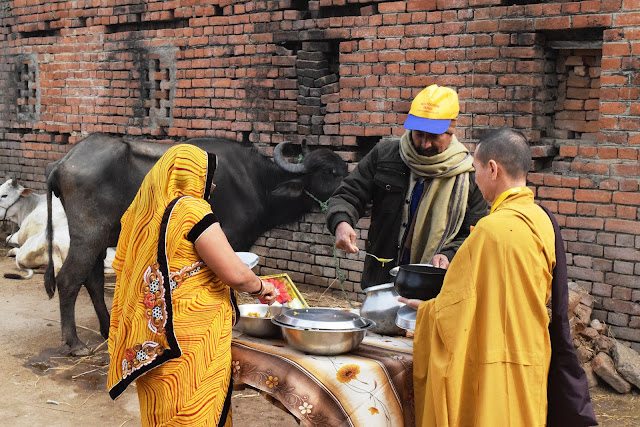 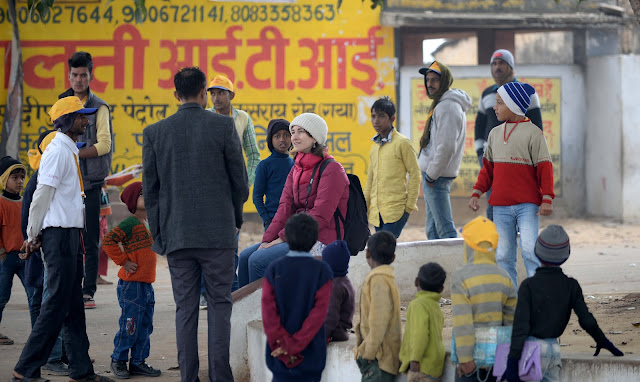 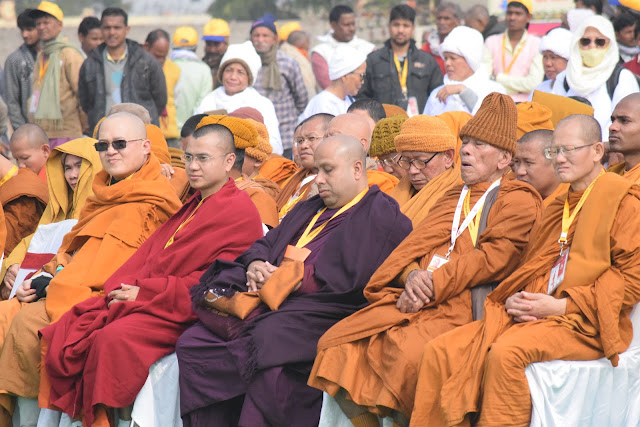 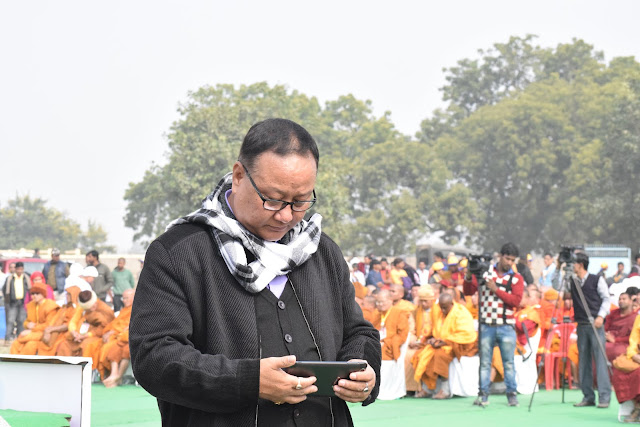 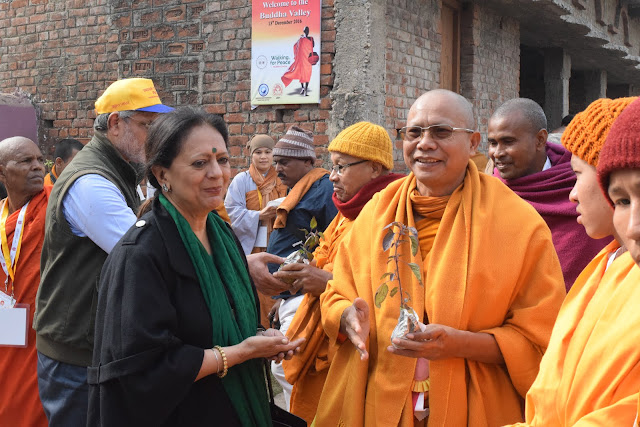 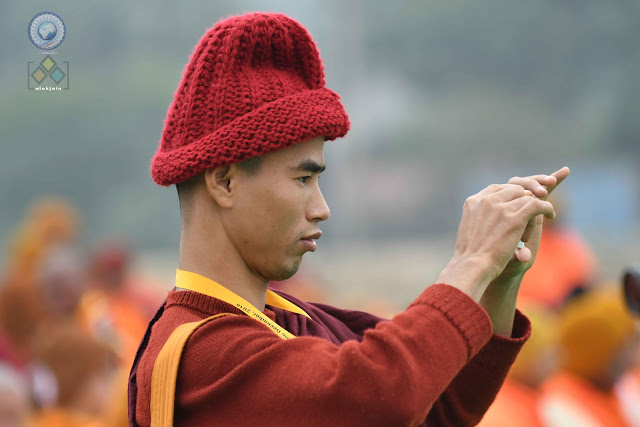 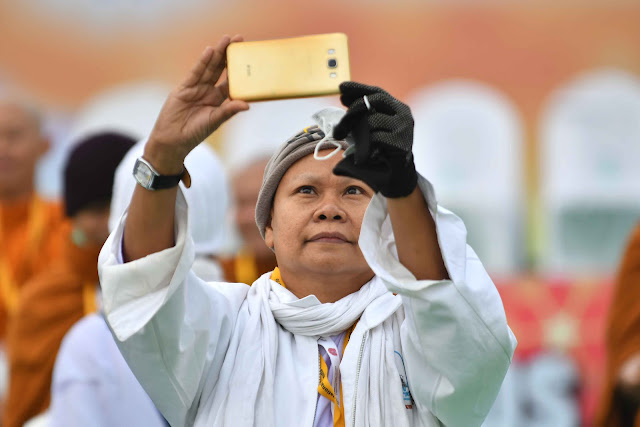 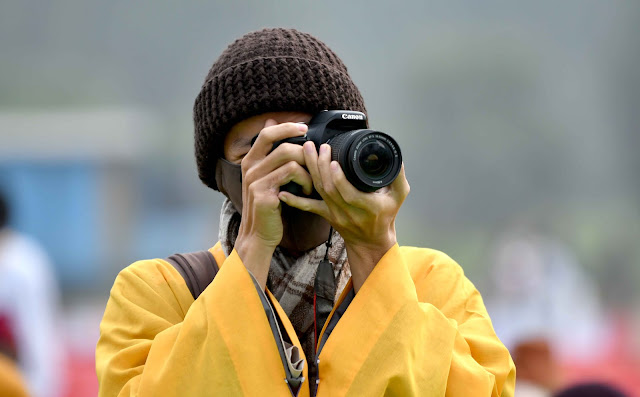 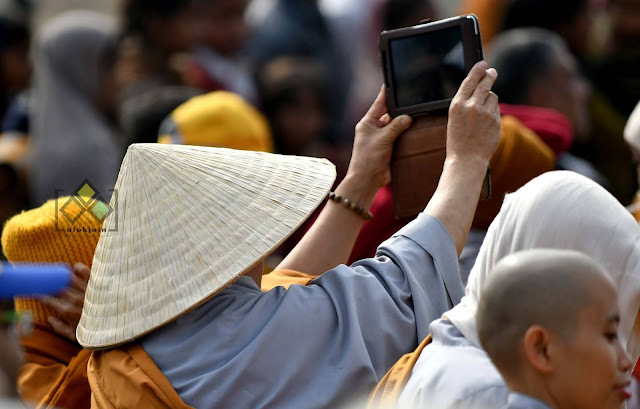 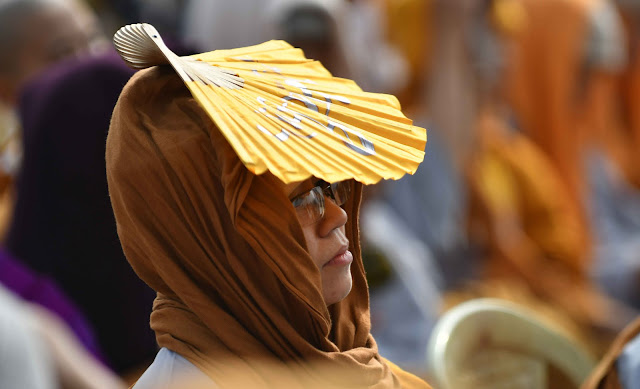 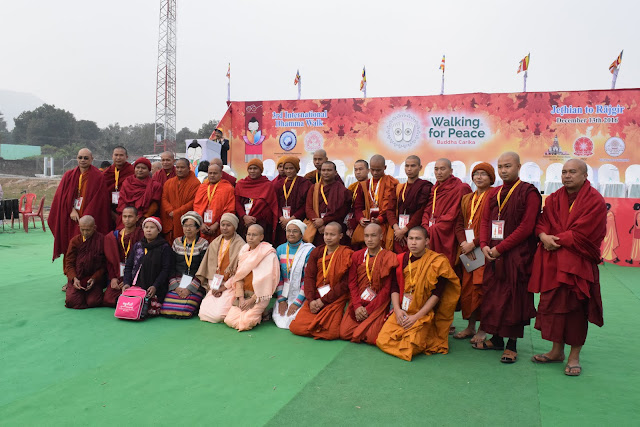 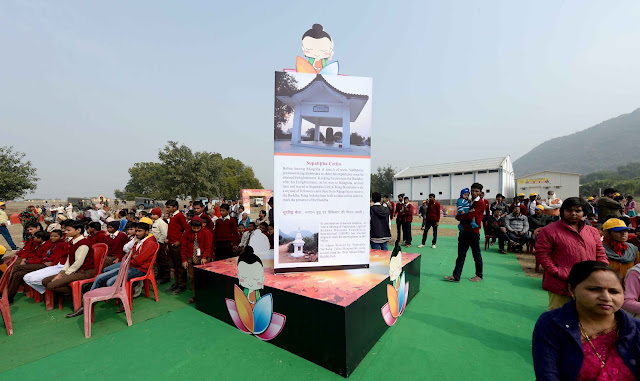 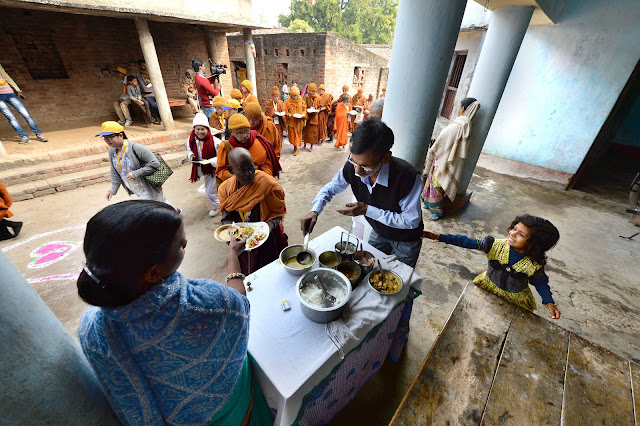 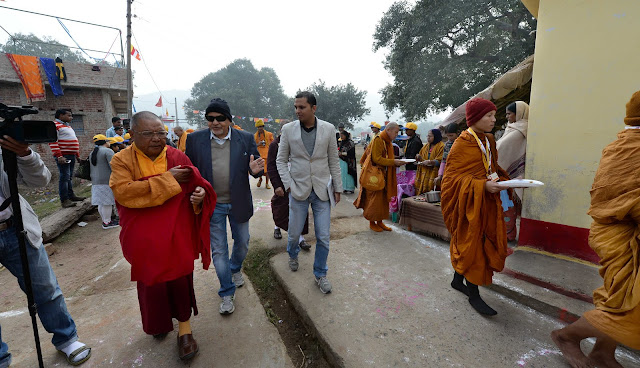 On behalf of the organisers of the Dhamma Walk, I thank the team of district officials from Gaya and Nalanda districts for shouldering the responsibilities with us. I specially want to mention that Ms. M. Manimekalai, Principal, Jawahar Navodaya Vidyalaya, Jeṭhian was constantly in touch, enquiring if we needed any help.  I have no words to thank the disciplined students of Jawahar Navodaya Vidyalaya, Jeṭhian who with their gesture and conduct won the hearts of the guests. The police team flanked the Buddha trail from Jeṭhian to Rājgir, with the smile on their face, waiting for opportunity to help the participants, a gesture appreciated by one and all. The mobile medical unit from Civil Hospital, Rājgir did a wonderful job by following the Walk. Last but not the least; I would like to thank the men, women and children of Jeṭhian, who volunteered their time to help make this event enjoyable.