Sixteen monks and nuns from different Buddhist monasteries of a small town Kōchi located on the island of Shikoku in Japan, with their alms bowls in their hands walked on the streets of Jeṭhian (50kms from Bodhgayā)   on 1st October to do Takuhatsu, meaning, collection of food by request. Taku in Japanese means ‘request’ and hatsu means ‘with eating bowls.’

Ven. Sataori Hanoka, the group leader and also the Head Priest of the Gugan Ji temple in Kōchi thanked the village community for offering the Saṅghadāna.  He said, My association with Jeṭhian goes back to 1998 when I along with other fellow monks from Japan first visited the Jeṭhian. On behalf of the group I thank the people of Jeṭhian for this spiritual experience of  recreating the ritual of collecting alms that Buddha did here in Jeṭhian centuries ago.

The tradition of collecting food by begging was instituted by the Buddha (6th BCE) himself. Every day in the morning, the Buddha and the monks and nuns of the Saṅgha took their begging bowls and go out into the community to seek food (Pāli:Piṇḍapāta). That is why the Buddhist monks and nuns are ceremoniously called Bhikṣu and Bhikṣuṇī, one who begs.  The Buddha saw this interdependence between the Saṅgha and the community as a spiritual connection. Laypeople have a responsibility to support the monks physically, and the monks have a responsibility to support the community spiritually. Also, according to the Buddha, to be able to feel the true nature of self, one needed to give up one’s ego. The Buddha advised monks to go seeking alms to eradicate their egos.

The tradition of Piṇḍapāta now survives only in Southeast Asian countries practicing the Theravāda Buddhist tradition. The practice of Piṇḍapāta has mostly disappeared in Mahāyana countries like China, Korea, Tibet, Mongolia, etc for various reasons but in Japan monks from some Mahāyāna sects periodically do Takuhatsu. Sometimes these monks recite sūtras or chant ‘Ho’ (Dharma) as they walk, signifying that they are bringing the Dharma, in exchange for alms.

The monks and nuns who participated in this Saṅghadāna have a deep connection with Jeṭhian. All of them belong to All Kōchi Young Buddhist Association (AKYBA), the Buddhist organization that has contributed towards creating the temple to safeguard neglected Buddhist sculptures in the village. Ven. Sataori Hanoka, on his first visit to Jeṭhian spotted ancient sculptures of Buddha and Buddhist deities lying neglected near the pond in the village. He shared his thoughts with monk members of the All Kochi Young Buddhist Association in Japan. With the contributions from AKYBA, the Temple (Buddha Manḍap) was completed in 2002. Ven. Sataori Hanoka and members of AKYBA have been now visiting Jeṭhian regularly to pay pilgrimage and contribute towards further revitalisation of Buddhist remains in Jeṭhian.

Jeṭhian during the times of the Buddha was called Laṭṭhivana (bamboo forest) and Buddha visited this valley many times in his lifetime. Later, in the first millennia this valley became an important seat of learning. The 7th CE Chinese monk scholar Xuanzang studied here under the eminent monk Jayaṣena.  In 13th CE, when Buddhism came to its ebb in Indian subcontinent, Yaṣṭhivana monastery and other vestiges of Buddhism in this valley fell into ruins. The name Yaṣṭhivana got corrupted and became Jeṭhian. In 17th CE, the new population who migrated from Rajasthan came and settled over the ancient Buddhist remains in this valley. In 20th CE, it was revealed that Jeṭhian was the ancient Yaṣṭhivana monastery mentioned by Xuanzang. Since then the community of this valley have been making efforts to preserve the place and create awareness locally and internationally about the significance of the place. They have even formed a committee named ‘Bhagwan Buddha Gram Vikas Samiti’ (BBGVS). The objective of the committee is to protect and preserve this sacred heritage and also facilitate safe and successful pilgrimage for the pilgrims coming from different countries.

The communities of Jeṭhian valley are aware that in ancient times Buddhist monks walking in the lanes of the villages in this valley for collecting daily alms was a common scene. They feel so blessed that Buddha often visited this serene valley to practice meditation. In the words of Shri Sadhu Saran Singh, the president of the BBGVS, The very thought that the Buddha might have walked on the streets of Jeṭhian to collect food is inspiring.

The community of Jeṭhian offered their first Saṅghadāna in year 2015 when more than 100 monks from thirteen countries under the banner of ITCC (International Tipitaka Chanting Council) collected alms in the streets of the village. Shri Ramuchit Prasad Singh, Treasurer of the Committee said, this was the tradition of the place in ancient times and in future also we will continue with offering Saṅghadāna to all the visiting monks and nuns.

Shri Dinesh Singh, a senior volunteer from the village thanked the monks and nuns for accepting the food offered by the villagers and hence offering the villagers an opportunity to earn Puñña (merits) in return. 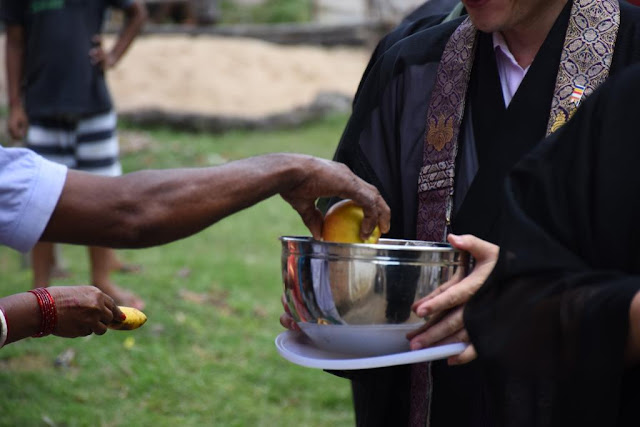 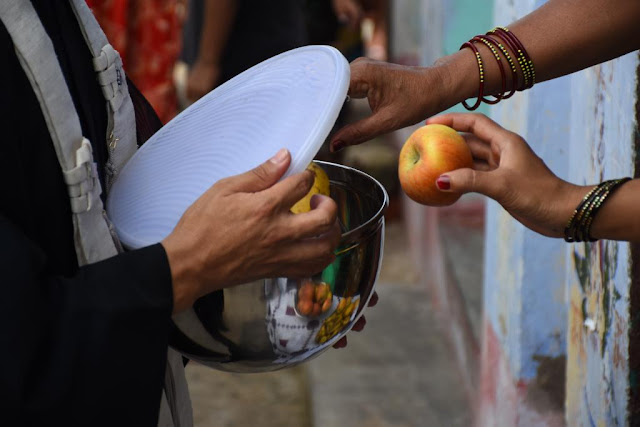 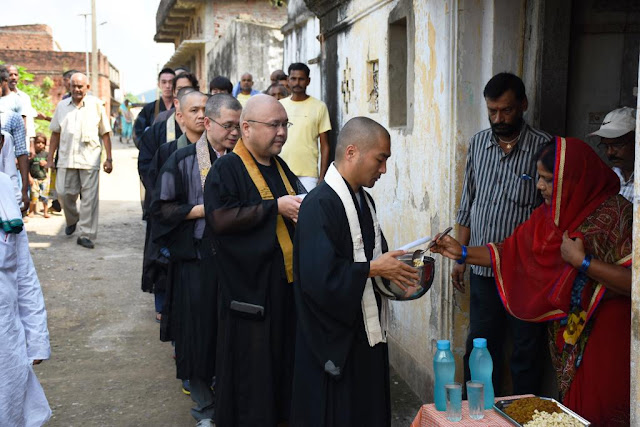 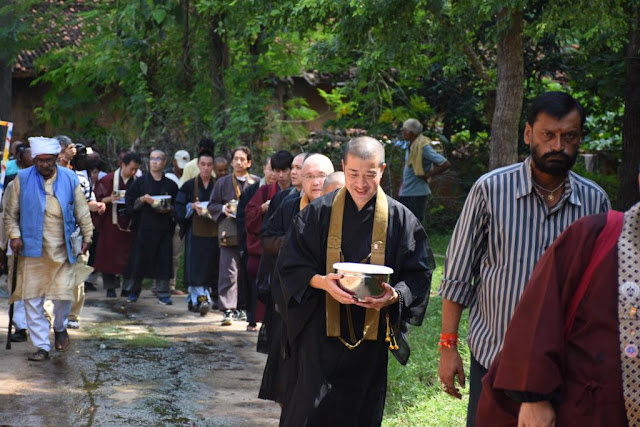 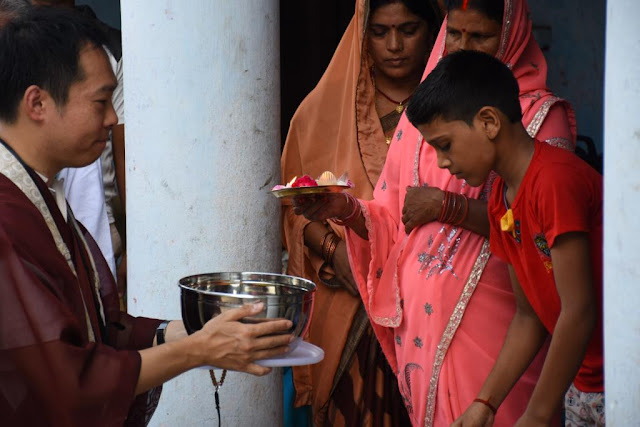 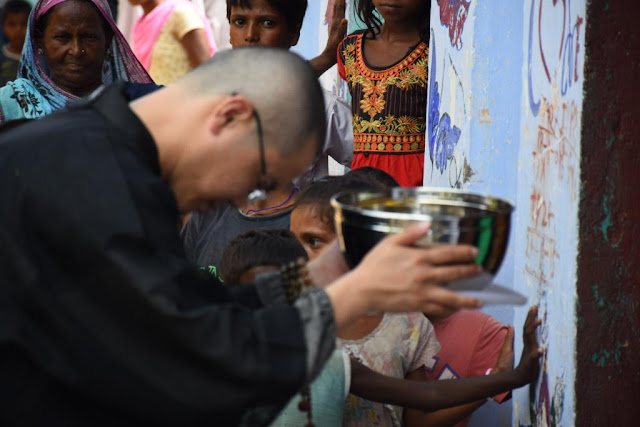 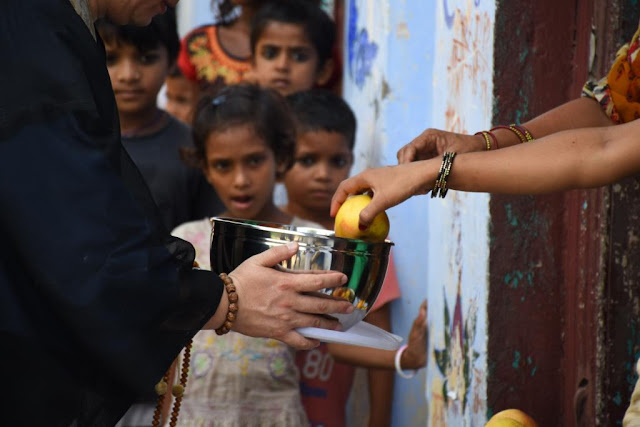 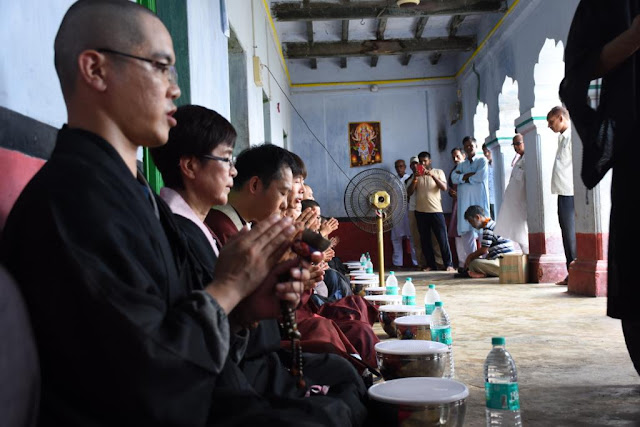 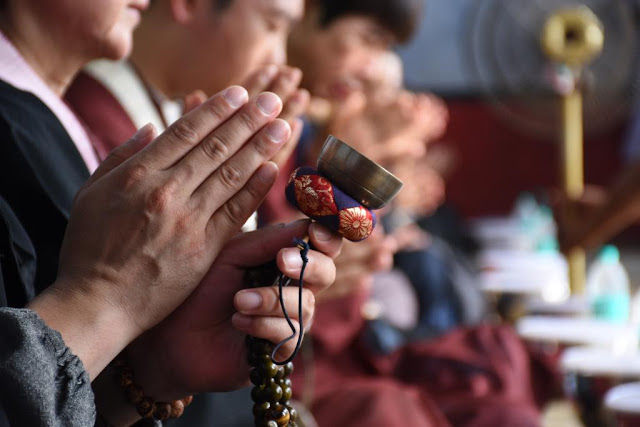 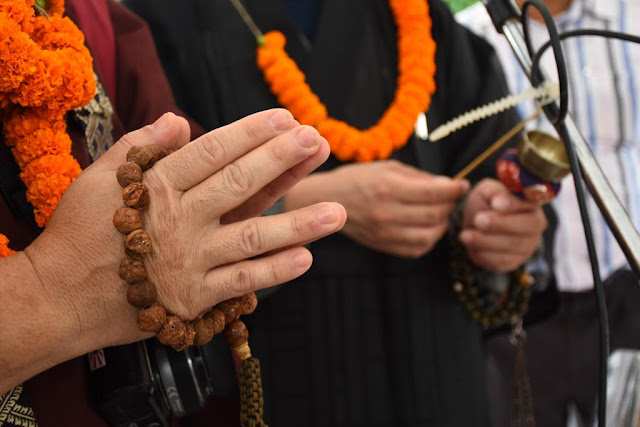