It is indeed a welcome development that after centuries of neglect, the Giriyak stūpa is now getting restored. The restoration work began in 2011-12. I learnt from ASI (Archaeological Survey of India) sources that the restoration of the cylindrical pillar of the stūpa has been partially completed. I along with a few students of Nava Nalanda Mahavihara (Deemed University) climbed up the Giriyak hill to see the restored stūpa and capture this beautiful piece of Buddhist architecture at the break of the dawn. This was my 7th visit since 2009 when I along with my kite photographer friend Yeves Guichard first visited the place to take aerial pictures of the place using a kite. The hill is around 750 feet high and steep. The path leading to the top is around 400mt  of walk. It is a 30 minute climb. We started climbing to the top at 4.45 am so that we could make it to the top before the break of dawn.


There is a small Vishnu temple at 100mt on the way to the top. The local devotees have made steps to reach to the temple. These steps are a big help because the first 100mt is very steep.  In the middle, for around next 50mt  after you cross the temple, there is no path and it is very risky, especially for the aged and the people who are overweight.  In this stretch at some places one has to literally crawl. The last 200mt  of the climb is relatively easy because it is a ramp, an ancient 12ft wide path paved with dressed stones. This ancient path is now reclaimed by thick vegetation but I have a picture of this ancient path I had taken when this path was revealed when the entire hill was cleaned (of vegetation) at the start of the conservation work of the stūpa.  In ancient times this path probably ran till the bottom of the hill but now only half of it survives. The second half going to the bottom is now lost, probably because of the rampant quarrying that took place in this hill in 1980’s. The scars of the quarrying may still be seen on all sides of the Hill.

The stūpa was surrounded by 10ft of fallen debris. The removal of the fallen debris in 2012 revealed that the cylindrical pillar is resting on a 10ft high brick platform. F. H. Buchanan, E.L. Ravenshaw, A.R. Broadley and A. Cunningham, the oriental explorer who visited this stūpa in 19th CE did not notice this square brick platform. The stūpa (square base + cylindrical pillar) is now approximately 30ft tall but in the middle of the 1st millennia, in its prime as conjectured by   Cunningham, the stūpa must have been not less than 55ft tall. The top of the stūpa which is now flat was once surmounted by a solid dome or hemisphere of brick of which only 6ft remains. The dome must have been crowned with the usual umbrella motif rising from a square base. Ravenshaw in 1839 noticed some beautiful stucco images with traditional Buddhist motifs on the dome. Traces of these stuccos on the dome that has survived elements for centuries can still be seen. Scientific clearance of the stūpa also revealed a thick layer of plaster suggesting that the stūpa was covered with plaster with Buddhist ornamentation picked out in simple colours.

Archaeological remains suggest that at some point of time in the first millennia it was a flourishing monastery.  A team of Archaeologist from ASI who had visited the stūpa in 2009-10 had told me that the stūpa has bricks from Mauryan (3rd -2nd BCE), Gupta (5th -6th CE) and Pāla-Sena period (8th-12th CE). Unfortunately, we do not know much about the name of the monastery and the significance of this beautiful stūpa. No sculptural remains have been reported from the site by Buchanan, Broadley, and Cunningham etc. In the name of inscription, all that have been discovered are numerous sealing bearing Buddhist creed. What is most surprising is that both the Chinese monk scholars Faxian (Fahien, 5th CE) and Xuanzang (Hsüan-tsang, 7th CE) who crossed this hill (see map) while visiting Indraśailaguhā (Parwati), Rājagṛiha (Rajgir) and birth place of Sāriputra are conspicuously silent about this place.

Cleaning the hill top in 2012 had also revealed remains of numerous brick stūpas at many points on this road. These remains of the stūpas of 6ft to 12ft diameter have stone foundations. On the south east of the stūpa are the remains of an artificial pond that has a wall of dressed stone. To the south west corner of the stūpa is a huge platform made up of dressed stone. The platform of dressed stone is approximately 60mt  long, 60mt  wide and 20mt  high. On the top of this stone platform are the remains of another brick stūpa, probably from Pala-Sena period. We don’t have much information because there are no published reports after 1860’s.  Scientific clearance in 2012 has revealed many new things that were not reported by the 19th CE explorers. ASI should come out with a report regarding the correct measurements and finds made since the conservation and restoration work was started in 2012.

Cunningham identified the Giriyak hill with Indraśailaguhā, the place where Buddha had discourse with Indra well documented in Pāli sources and also mentioned by Faxian and Xuanzang. However, recent studies confirmed that this was a wrong identification and isolated hill of Pārwati was the correct identification for Indraśailaguhā. Another very important place in this vicinity visited by Faxian and Xuanzang is the Ashokan stūpa to mark the parinirvāṇa of Sāriputra, the prominent disciple of the Buddha. Scholars have proposed different identification like Chaṇḍimau, Nānand, Giriyak as the village of Sāriputra, all places in the vicinity of Giriyak hill. Since 2010, Nava Nalanda Mahavihara has been organising Sāriputta World Peace Walk on the occasion of parinirvāṇa anniversary of Sāriputra on Kārtika Pūrnimā (full moon day of November).  The objective of this walk is not only to pay rich tribute to Sariputra for his contributions to the Buddha, the Dhamma and the Sangha but also to create awareness towards the Giriyak stūpa.


The cylindrical stūpa adorning the Giriyak hill is one of its kinds in the Buddhist world.  On a clear sky the stūpa is visible from as far as 15 kms. Because of its size, magnificence and placing the cylindrical stūpa has given rise to many local legends and folklore. Locally, the people call this cylindrical pillar as Jarāsandha ka Baiṭhka (sitting place of Jarāsandha). As per the Hindu epic Mahābhārata, Jarāsandha was the king of Magadha. Ancient Purānic literature that mention kings and kingdoms in India starts with Magadha as the first empire, Rājagṛiha the first capital and its list of kings starts with Jarāsandha from Bṛhadratha dynasty as the first king. We can imagine the might of Jarāsandha that many of the ancient structures in Rājagṛiha and around including the cyclopean wall are associated with his name. Giriyak since the ancient times has been strategically a very important place. The 70kms long Rājgir-Jeṭhian hill range running west to east abruptly ends at Giriyak. Many of the very important Buddhist pilgrimage sites including Rājagṛiha (Rajgir), Jeṭhian, Indraśailaguhā (Parwati), Buddhavana, Prāgbodhi are part of this hill range. In ancient times an important trade route connecting Pāṭalipūtra (Patna) and Tāmaralipti (Tāmluk, West Bengal) passed through Giriyak and now NH 31 connecting Patna and Ranchi passes from here. River Pānchāne flows past the Giriyak hill on its east making the whole landscape picturesque.

The landscape of Magadha after the Mahāparinirvāṇa of the Buddha (5th BCE) became a major centre of Buddhist pilgrimage and monastic activities. The new political climate in the 2nd millennia was not conducive for growth and development of Buddhism. By the end of 13th CE, Buddhism came to its ebb in Magadha. All the stūpas, monasteries and other vestiges of Buddhism got converted into ruins. All the beautiful architectural marvels that once dotted this landscape are now unfortunately lost or are buried under the layers of biomass and now villages settled over them. Fortunately, stūpas and ancient remains on the top of the many hills of Magadha have survived to remind us of our glorious past. It is very unfortunate that revitalisation of this and many such very sacred remains is very slow. Let us cherish and celebrate marvelous creation of our ancestors. 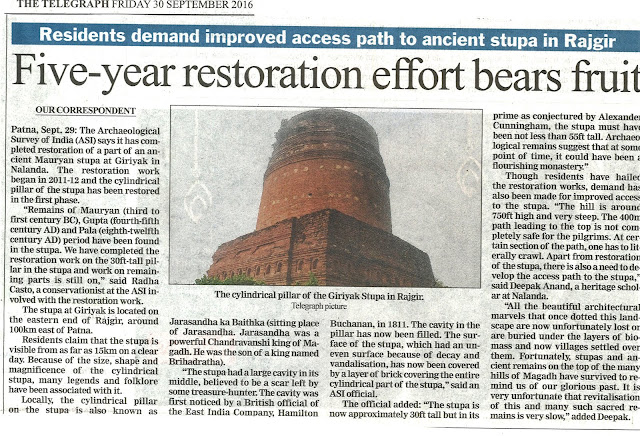 Special thanks to Prabal Anand Upasak

Ravenshaw, Edward Cockburn. 1840. “Notice of Inscriptions in Behar”. The Journal of the Asiatic Society of Bengal, New Series, Vol. 8. Calcutta: Bishop’s College Press. pp.352.
Posted by Deepak Anand at 11:35 AM