From Metropolitan Museum to its Rightful Place

An 8th CE statue of Buddha in Abhayamudrā (gesture of fearlessness) stolen from mahant compound (Brahmanical Monastery), Bodhgayā somewhere between February 1987 and February-March 1989 will be soon brought back to Bodhgayā and will be placed in Bodhgayā Museum. Probably, this is the first time in Bihār, where a stolen sculpture from this state, is returning back from a foreign country to its find spot. Thanks to the efforts of Dr. Debala Mitra, former Director General, Archaeological Survey of India (1975- 83) that this stolen statue has been returned by the Metropolitan Museum, New York and is presently lying at Central Antiquity Collection Section, Archaeological Survey of India, Purana Quila, New Delhi. 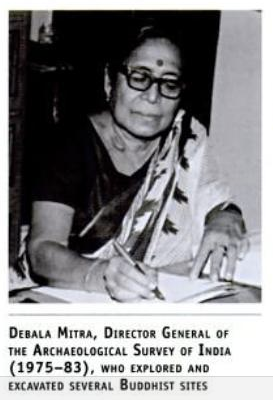 The story goes back to February 1987 when Dr Mitra on her visit to Bodhgayā had seen this statue of Buddha in the premises of Maṭha (mahant compound). In her next visit to Bodhgayā in March 1989, she found the same statue missing. Dr. Mitra discovered that the Maṭha people had not reported the theft to the local police. One of the friends of Dr. Mitra drew her attention to image of standing Buddha figure in published in catalogue Arts of South and South-East Asia (Lerner, Martin and Kossak, Steven, Metropolitan Museum of Art, New York, 1994, Fig. 30, Accession No. 1990.115).  Dr. Mitra after comparing her own records with the details published in the catalogue concluded that the Buddha image published in catalogue was the same statue of the Buddha that had gone missing from Bodhgayā Maṭha. She reported the matter to the Archaeological Survey of India (ASI) on 4-5-1990. ASI noticed that the statue was registered by Shri Shatanand Giri of Bodhgayā Maṭha on 4-10-1976 vide registration no. GYA/ BH/68/.  Once it was ascertained that it was same sculpture that was missing from Maṭha, the ASI reported the matter to the Indian Embassy, New York. The Embassy after an enquiry with the Metropolitan Museum confirmed that it was the same statue. The Metropolitan Museum agreed to return the statue without any compensation. The statue was collected from Metropolitan Museum by ASI on 23-3-1999.

The provenance of this statue as shared by Metropolitan Museum in its catalogue says that statue was purchased from Friends of Asian Arts Gifts in 1990.  The title ‘Friends of Asian Arts Gifts’ is a subterfuge created by the dealers, middlemen and collectors who were involved in stealing this artefact from Bodhgayā. The catalogue is also silent about its actual find spot (Bodhgayā, the place of origin) of the Buddha sculpture. Instead they have mentioned ‘Bihar.’ Museums most of the times like in this case are aware that many of the artefacts that they purchase were recently stolen from their place of origin. But false and incomplete titles created by middlemen and dealers like the one in this case make these stolen artefacts acceptable (ethical) to reputed museums like Metropolitan Museum. There has been a growing pressure on museums in Europe and USA to adopt ethical acquisition policies to discourage illegal trafficking and damage of heritage sites in source countries. Most of them have now adopted 1970, the year of the UNESCO Convention, as a marker for enquiries into provenances of artefacts. This means that in countries that have ratified the UNESCO Convention, museums and museum organizations are obligated to conform to the 1970 rule for all acquisitions after 1970.  To circumvent this obligation, in many market and transit countries, retailers and dealers engage in creating false provenances of stolen artefacts to make them ethical as per the 1970 rule. Museums these days are progressively distancing themselves from the sources of the acquisitions. Intervention of dealers and collectors in the chain of artefact trade allow museums to acquire ‘ethical’ artefacts through purchase or gift – at any rate without direct knowledge of destruction, stealing or illegal trade of artefacts. The absence of real knowledge of the provenances of artefacts not only allows museums to claim ignorance of an acquired object’s provenance, but also prove innocence if an object is subsequently shown to have been stolen or illegally transacted.

This Buddha sculpture could be retrieved from Metropolitan Museum because it was registered with ASI. There was sufficient photographic and documentary evidence to prove that the statue was in Mahant Compound, Bodhgayā till 1987. Hence, for the Metropolitan Museum, this artefact didn’t qualify the ‘1970 Rule’, i.e. it was not out of its place of origin (India) before 1970 and therefore, Metropolitan Museum had to return it.

The statue is presently kept at Central Antiquity Section, Purana Quila for last 17 years. Dr. Sarjun Prasad, Asst. Archaeologist, ASI,  currently posted at Purana Quila has made initiative to bring statue back to Bodhgayā, the place from where it belonged. Thanks to the efforts of Dr. Sarjun Prasad, the statue will soon be reaching back to Bodhgayā after more than 25 years since it was stolen.
Mahant compound once hand hundreds of ancient sculptures kept at various temples in its premises. These sculptures of Buddha, Buddhist and Hindu deities belonged to Mahābodhi temple. Most of the sculptures that were kept at mahant compound are now missing. They have been now stolen. The selves in the walls of mahant compound had some of the finest images of Buddha and Buddhist deities are now empty. It’s a common story in Bodhgayā that most of the people who have became rich overnight in last 50 years and now own respectable business were at some point of time involved in illicit trade of artefacts. Most of time it happened in connivance with the people living inside the mahant compound.