A brief life history of Xuanzang… 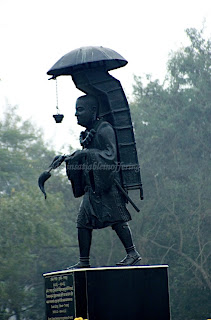 Xuanzang was born in 602 in a family of scholars in Henan province as the youngest of four children. His family was a conservative Confucianist and his father, a Confucian scholar, was instrumental in teaching Xuanzang the Confucian ethics and politics. Following in the familial ties Xuanzang became well versed in Confucian classics at an early age. But his quest for learning and his elder brothers’ example prompted him to explore Buddhism and soon his prodigious intelligence and religious conviction became so strong that he expressed interest to take Buddhist orders at the age of thirteen, the abbot Zheng Shanguo made an exception in his case because of his vast knowledge of the subject. Xuanzang was fully ordained as a monk in 622, at the age of twenty.
Xuanzang though trained in Confucian practices at younger age but with his deeper understandings of Buddhist philosophies was convinced that Buddha’s teachings would help everybody live a more meaningful life. As Xuanzang explored the Buddhist texts he encountered several discrepancies that he attributed to the interpretation flaws which prompted him to undertake the momentous journey to India and it became his mission in life was to understand the teachings of Buddha in their entirety.
In 629, Xuanzang sneaked out of Tang territory as a fugitive and traveled to India against the decree of his King. He traveled through the famous silk route, braved through mountains and deserts and had several miraculous escapes from thieves and murderers. Besides the physical threats, there were other more complex hurdles including those of marriage proposals to queens, high positions in royal courts and wrath of important kings insisting him to stop pursuing his journey. But in the end his determination prevailed and all those adversaries recognized his commitment. They even helped him and paved the way forward for a smoother sail.

He spent many years learning from the best of teachers and learning from various schools to get an overall and in depth knowledge of them all. Xuanzang spent a lot of time in Nalanda studying Sanskrit, Pali, Grammar and Logic to be able to understand the sutras well and also their deeper meanings. Once he had sufficient handle on the teachings of Buddha, their different interpretations and understanding of conflicting schools of thoughts, he decided to return to his homeland with deepest desire to share that knowledge with everyone. 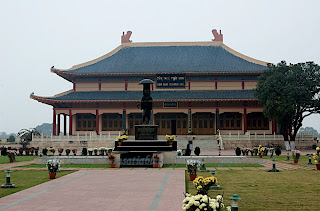 In the year 645, Xuanzang returned to Chang’an with Taizong’s permission and brought with him about 657 volumes of Buddhist Sutras. Xuanzang’s perseverance and dedication to his religious calling helped him win the heart of the same king whose orders he had defied 16 years ago and he obtained royal patronage and protection for Buddhism which he knew was important if the religion has to make its way to the common man.

Xuanzang rigorously translated Sutras to Chinese pondering over each phrase to make sure that their deeper meanings are not lost in the translation. And he convinced Taizong to write the preface for his translations of holy teachings.
His travelogue, ‘journey to the west’ was written to please Taizong and help obtain support for his translation work and is a thorough account of all the monasteries and the type of education they provide so that anyone who would like to pursue this route in future would know what to expect and it might actually encourage more people to travel in pursuit of knowledge.

In 664, Xuanzang knew it was time for him to make another spiritual journey and he retired from the translation work and spent all his time in meditation and prayers. His body was buried by the river as he had wished and later king Gaozang built a temple to mark the spot and it still stands after 1300 years.
It is impossible for a lay person to understand what motivated Xuanzang to accomplish such stupendous task but probably it would suffice to say that he recognized his true calling and walked towards his destiny leaving behind any obstacles and distractions he encountered on his way. This might be the very reason that the stories from his life are considered sacred and made him immortal, almost an incarnation of Buddha himself. 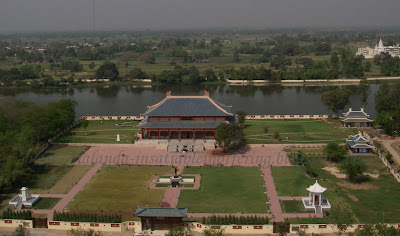 It is the above mentioned travelogue that is used as a reference for the rediscovery of the ‘Land of Buddha’. There is a memorial built in Nalanda to honor this great scholar who traveled extensively in pursuit of ultimate wisdom and en route transformed everybody who crossed his path and connected them together with a thread of humanity. And it is because of this quality of his, that besides being considered an enlightened being and a great scholar, he is also considered a diplomat…

Note: The pictures that you see in this post were taken at the Xuanzang Memorial in Nalanda.
Posted by Deepak Anand at 5:00 PM

Email ThisBlogThis!Share to TwitterShare to FacebookShare to Pinterest
Labels: Xuanzang

Another Question : It is understood that how Xuanzang helped Buddhism to spread in China but it is not clear how he helped in evolving the ongoing journey of Buddha Discovery.