Bringing Nalanda from Past to the present...

If you have been following this journey so far you must have noticed that we have covered the history of Nalanda in great detail, from literature to the archeological survey to the ruins as they stand today.
And in the course of this travel it must have, no doubt, occurred to you more than once about the present scenario at Nalanda. How it stands today, how can you get there and what all can you expect?
Well, we are now getting anxious to discuss our Nalanda as it stand today. 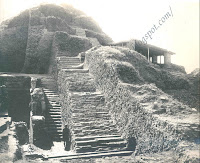 The present exposed Nalanda was completely exposed in 1934. It was a great discovery made possible by the travelogues left to us by the 7Th century visitor Xuanzang. The praise he showered on Nalanda Mahasangharama and the painstaking detail with which he described each structure was one of the very big reasons that it made to the top of the list of exploration.
At the time, these excavations and exposition were more of an intellectual pursuit. Slowly people recognized the roots of there on culture in these half demolished buildings and tourists started pouring in, slowly at first but steadily none the less.
The site became a big attraction for what it stands though it was not staged properly and never got its due regard beyond the religious and the intellectuals.

The development in the area took place on a need base with an ad-hoc approach, to make do with the resources available and not necessarily look beyond the immediate crisis. The local authorities probably never anticipated that this piece of heritage will grow in popularity and attract plethora of tourists. So, as could be expected the infrastructure is failing.

Growing needs of the area and the requirement of better infrastructure is also coupled with the dire need for sustainable livelihoods for the locals.
Tourism provides a unique opportunity for the locals to step up and be part of the growing economy; but the lack of foresightedness on the part of the managing authorities and lack of coordination between various disciplines of government has actually been a detriment for their growth. Since there is no proper development plan of the area, the haphazard sources of livelihood that people have invented has added to the chaos. And so far managing authorities have been treating them as a problem and trying to eliminate them. But the solution lies in the interdependencies and context sensitive solutions.

Nalanda has traveled from being a much coveted university of royal patronage to being buried under the earth for centuries, to being discovered by explorers and now to the modern day chaos at it doorsteps.
That was the past but now the lessons that were taught inside Nalanda centuries ago are inspiring us to find a new balance and seek peaceful, sustainable coexistence with our surroundings and Nalanda (that is insatiable in its offerings) is starting a new leg in this journey.

As we have mentioned before, the universe provided us with right inspirations, help and support of the people; and we had this opportunity to develop a master plan for Nalanda.
The present master plan that we’ll be sharing with you in the upcoming posts is designed by involving the community through Participatory rural appraisal, trying to gauge their needs and giving them a platform to voice their concerns and solutions.

As you’ll experience from the dialogues we had with the community and the final solution, the local people are the best judge of any policy making since they are the ones who execute it. And the people of Nalanda value their heritage and are striving to find a balance between generating livelihoods and sharing their culture with tourists while maintaining the sanctity of the place and preventing any further exploitation.