There are many stories associated with the birth of Jivaka. According to the Anguttara commentary he was the son of Salavati, a courtesan of Rajagaha with Abhayarajakumara (Son of Raja Bimbisara) but some accounts maintain Jivaka was Ambapali’s son with Raja Bimbisara. As per the Vinaya sources the child was placed in a basket right after birth and thrown on a dust-heap, from where he was rescued by Abhayarajakumara. When questioned by Abhaya, people said "he was alive" (jīvati), and therefore the child was called Jivaka; because he was brought up by the prince, he was called Komārabhacca (child of a Prince). It has been suggested, however, that Komārabhacca meant master of the Kaumarabhrtya science (the treatment of infants); VT.ii.174; in Dvy. (506-18) he is called Kumarabhuta because of his medical profession.

When he grew up, he learnt of his antecedents, and went to Takkasila without Abhaya's knowledge and studied medicine for seven years. When he returned to rajgir, Abhaya established him in his own residence. There he cured Bimbisara of a troublesome fistula and received as reward all the ornaments worn by Bimbisara’s five hundred wives.

DalhaSa, the 12th century commentator of the Susruta Samhita, says that Jivaka's compendium was regarded as one of the authoritative texts on the subject. Another text that quotes Jivaka's formulae is the Navan_taka (meaning 'butter'), a part of the Bower MSS discovered in 1880 from Kuchar in Chinese Turkistan. Based on earlier standard sources, this medical compilation of the 4th century AD, attributes two formulae dealing with children's disease to Jivaka, saying 'Iti hovaca Jivakah, i.e. thus it spoke Jivaka. One formula is: i.e., Bhargi, long pepper, Paha, payasya, together with honey, may be used as linctuses against emeses due to deranged phlegm.

The time has erased all evidences of the first meeting between the Buddha and Jivaka. As Xuanzang describes in his travelogue that Jivaka’s private residence was on the road connecting Griddhkuta and Veluvana.

"North-east from Srigupta’s Fire-pit, and in a bend of mountain wall, was a tope (stupa) at the spot where Jivaka, the great physician, had built a hall for the Buddha. Remains of the walls and of the plants and trees within them still existed. Tathagata often stayed here. Beside the tope the ruins of Jivaka's private residence still survives." 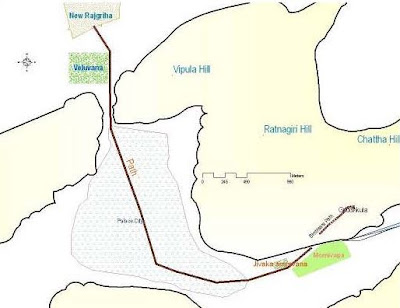 Next Post: Association of Jivaka with the Buddha
Posted by Shalini at 6:02 PM