Buddha made his 44th Vassa (rainy season retreat, June/July to September) at Sravasti and it is possible that upon reaching Griddhkuta (Vulture's peak) from Sravasti, he started his last journey. We know from the Mahaparinirvana Sutta that the Buddha in Veshak (May) entered into his 80th year and then he did his 45th Vassa at Beluva. We also know that the Buddha attained Mahaparinirvana in May, also his 80th Birthday. So the question is whether the Buddha continued towards Kushinara from Beluva as mentioned in the Mahaparinirvana Sutta or if he visited some other places in-between those months (September to May). An important event that took place six months before the Mahaparinirvana of the Buddha is the Parinirvana of Sariputta and Maha Moggallana. And the sequence of the events that followed is tabulated in Table 2.

We know from Pali sources that Sariputta took permission from the Buddha before leaving for Nalaka to attain Parinirvana there. We also know from the Cunda Sutta that the Cunda arrived at Sravasti with the relics of Sariputta, and the Buddha went to Rajgriha and then Nalaka to enshrine the relics of Sariputta and Maha Moggallana. The Ukkacela Sutta mentions about the Buddha coming to Ukkacela on his way to Vesali and at a gathering of the monks uttered high praise of the two chief disciples (Sariputta and Maha Moggallana) and spoke of the loss the Order had sustained by their death (S.v.163f). The Sequence of events in addition to the Mahaparinirvana Sutta which happened in the last two years of the Buddha is tabulated in Table-2. 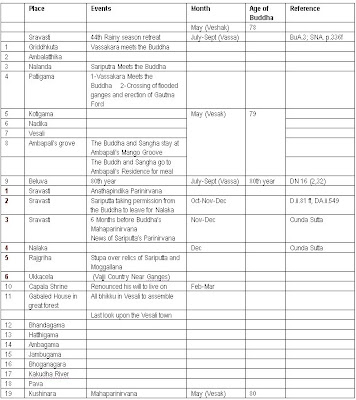 Table 3 is an effort to sequence all of the events mentioned in the Mahaparinirvana Sutta and other incidents that happened in the last two years of the Buddha’s life as mentioned in other Pali sources. Columns 4 and 5 are an estimate of the probable month in which that event is supposed to have happened. We have very little evidence of the exact months of events; the tabulation is more of a conjecture based on what little evidence has been found from the references mentioned in the last column.
Figure 3- The complete travel of the Buddha in his last two years based on Table-3

Total distance traveled by the Buddha in his last two years
The evidences suggests that the last journey of the Buddha as mentioned in Mahaparinirvana Sutta (table 1, Fig,1) is not the only journey he took in his last two years. There are many other events mentioned in other Pali sources (table 2, Fig-2) that took place in the Buddha’s last two years, i.e. during his Mahaparinirvana Sutta (journey). If we put all that together we find that the Buddha’s retinue walked over 1650 kilometers in the last two years (Refer table- 5).
1650 kilometers is the GIS distance (i.e., shortest) connecting the major places he visited; the actual distances through trade routes must be much more. Many places like Nalaka, Ukkacela and Kushinara are yet not identified and we have used Xuanzang’s description to put these places on the map for calculation purposes. The actual distance might be anything between 2000 to 2500 kilometers in which the Buddha walked during his last days.
Reference material used 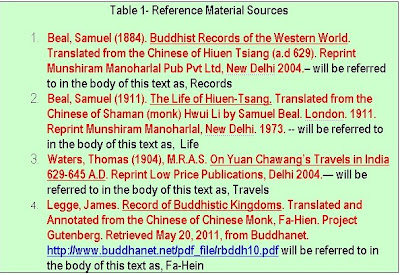 In the modern standard Chinese pinyin transliteration, it should be written as Faxian.

As per pinyin transliteration, it is Xuanzang.

Yes, there are so many spellings. The spelling one I too like.
See: The World of Buddha Footprints
and
This sutta in Pali gives data, but the ending in Chinese and Tibetan has a different ending. There is a Buddha Footprint given.