Fahein and Xuanzang – North of the Ganges

Retracing the “Echoes of the Footsteps of the Buddha”, in Bihar, with the Fahein and Xuanzang has reached us to set of places north of Ganges (Table-1). Both the Pilgrims have almost taken the same route and same set of places (Fig-1 and 2). A comparison of pilgrimage of both the Pilgrims gives us opportunity to “read” the minds of Xuanzang and Fahien, i.e. their sense of distance and direction and what they found worth detailing. These set of places has received maximum attention by the explorers and archaeologists in last two centuries. 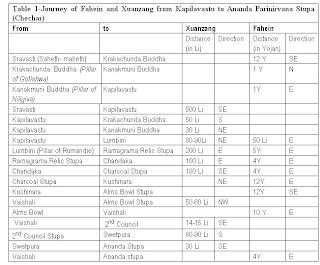 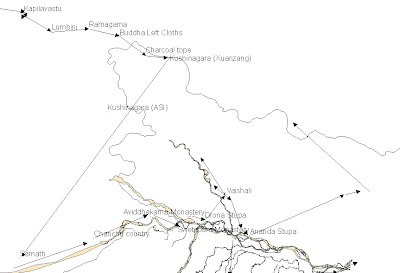 We find that the values vary to a large extant even for small distances. Most likely, we have not accounted for the specifics around land use and pack and track routes of ancient times. We also cannot discount the fact that the measurements listed in the accounts may have been merely approximations based on hearsay and not actual measurements made by the monks themselves.
Instead of one fixed value of Li and Yojan we shall use a buffer of values (one Minimum and one Maximum) for calculation purpose.
For Li we shall have
1 Li= 300 Mts (Min) - 400Mts (Max)
1 Yojan= 8 Miles (Min) – 10 Miles (Max)
We have tabulated the Description of Xuanzang and Fahein from Sravasti to Ananda’s parinirvana place, just to compare their individual approaches. We observe Xuanzang has given detailed description of the relics and events associated with the place.

From Table-5, we find Xuanzang talks more about the contributions of King Ashoka at all the pilgrimage places, Fahein mentions King Ashoka only at Ramagrama i.e. when Raja Ashoka open the stupa to remove the Relics for rising the 84000 Stupas. Another important difference is their accounting of the inscribed Ashokan pillars. Fahien is completely silent about the tall inscribed pillars except at the Alms Bowl Stupa (on his way to Vaishali, and of which Xuanzang is silent). Why did Fahein fail to mention these imposing conspicuous pillars, which Xuanzang says were inscribed with the historic events occurring at those sites? One possible reason could be that the pillars were inscribed with Ashokan Brahmi, a script that was more than 600 years old, and which Fahein was unable to read or find a translator to read it to him.
Posted by Deepak Anand at 10:10 AM

(2) "Fahein" should preferably be written as "Faxian".