Where did the Ananda attain Parinirvana 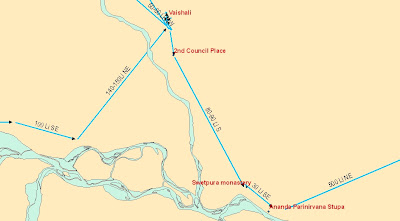 From the GIS projection of Xuanzang’s description of places visited (Table 1a), we are able to deduct with a fair amount of certainty the most possible places that match those sites in the description (Table 1b). These places are the most appropriate places for the description available and the antiquities found at the site. Further scientific exploration and excavation is needed to reach any conclusion.
Table-1-b- Matrix of possible places

Place of 2nd Council
The 2nd Council meeting place was the first place mentioned by Xuanzang as he left Vaishali. This site is located 15 Li south-east of Vaishali.  At the site of the council, he mentioned a great stupa (See fig. 2). According to Xuanzang, two different conversions of Li were given in his accounts.
15 Li is between 4.5km (1 Li=300 m) to 6 km (1 Li= 400 m)
Within this distance range from Vaishali, are located a group of villages, with Bhagwanpur (25° 56’ 39 N, 85° 07’ 16 E) being the most suitable place among them to match Xuanzang’s description. Bhagwanpur Village is settled on a big mound spread over a large area. In the western corner of the village is a tank (pond) and by its side is big stupa shaped mound (Fig 3 and 4). On top of the mound is a temple. The temple is very popular among the locals.
Fig-2- GIS Projection for Possible places for 2nd Council 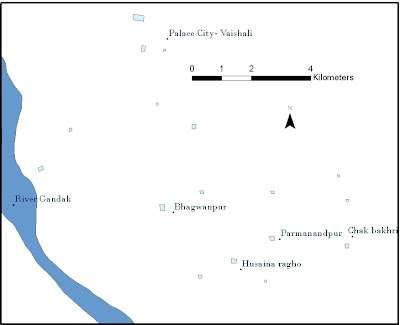 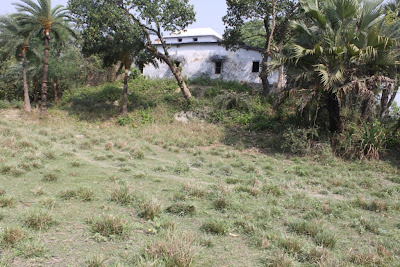 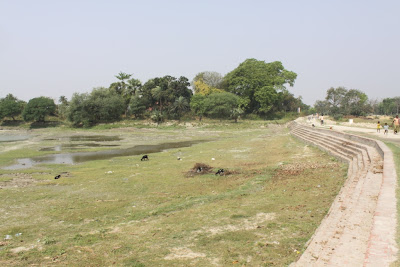 Eighty to ninety Li south of the 2nd Council meeting place (Bhagwanpur) one arrives at Hajipur by the northern banks of the River Ganges. In the biography of Xuanzang, Swetpura Monastery is mentioned as 100 Li south of Vaishali (The Life of HIUEN-TSIANG by SHAMAN HWUI LI, S.Beal,-Book-III- P-101).With many ancient remains, Hajipur seems to be a promising site for the Swetpura Monastery. This site needs systematic study to locate the remains of the Swetpura monastery where Xuanzang collected the Bodhisattava-Pitaka (The Life of HIUEN-TSIANG by SHAMAN HWUI LI, S.Beal,-Book-III- P-101). Xuanzang mentioned that near the monastery was an Ashokan stupa marking the place where the Buddha looked back north to Vaishali as he was going south towards Magadha.  The aerial distance (GIS) between Vaishali and Hajipur is 43 km and it is from here that Xuanzang crossed Ganges as mentioned in Life
Figure 5- GIS Map with the places discussed 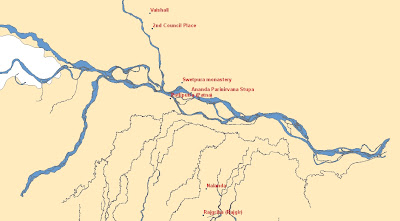 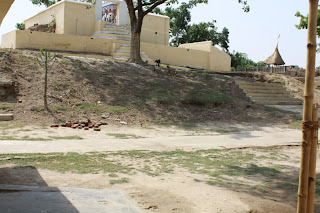 Ananda Parinirvana Stupa
Ananda was the cousin of the Buddha and also his attendant. The Pali Canon is silent on Ananda's death, but the commentaries mention that Ananda lived one hundred and twenty years (DhA.ii.99 ;). He is bracketed with Bakkula, as having lived to a great age (AA.ii.596). The description of the Parinirvana of Ananda is mentioned by the pilgrims Fahein (The records of Buddhist kingdoms By James Legge, P- 89) and Xuanzang. Both of them mention the same story with minor differences, probably an old tradition which they were told here. As per the description of Fahien, when Ananda was on his way from Magadha to Vaishali, there to die, Ajatasattu heard that he was going, and, with his retinue, followed him up to the River (Ganges). The chiefs of Vesali (Vaishali) also heard the news and went out to meet him, and both parties reached the river banks. Ananda, not wishing to incur the displeasure of either party, entered into the state of Samadhi in the middle of the river and his body went up in flames (Fig-7). His remains were divided into two portions, one for each party, and they built a chetiya for the enshrinement. Xuanzang visited the half body relic stupas of Ananda at Vaishali and Rajgriha (Ref. Buddhist records of the western world- S. Beal, Book-VII, P-73, Book-IX, p-160). 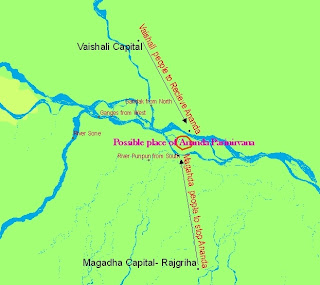 Xuanzang and Fahein both visited Ananda’s parinirvana place from Vaishali (See fig-1). While Xuanzang came via Swetpura Monastery, Fahein came directly from Vaishali. Xuanzang gives a more elaborate description of the events behind the Parinirvana of Ananda and the Parinirvana itself.  According to him, Ananda became the patriarch of the sangha after the Parinirvana of the Buddha and Maha Kassapa. Ananda guided the sangha from some monastery in the woods near Rajgriha.  One day a monk on being reminded by Ananda to recite the true teachings of the Buddha replied, “Your reverence is of great age; your interpretation is of the words is mistaken one……” Ananda realized that the time for his parinirvana had come and he decided to attain parinirvana at Vaishali. And from here the story matches that of Fahein, except for a detail mentioned by Xuanzang that Ananda attained parinirvana in a boat in the River Ganges
The description by Xuanzang and Fahein further leads us at Chechar. Fahein says 4 Yojan east, but Chechar is actually 53 km (Aerial Distance) southeast of Vaishali. Fahein further adds that the place is also a confluence of five rivers. We find three major rivers meeting at Fathua and Chechar. River Gandak meets from North, the Ganges coming from West and Punpun joining Ganges from south. Satellite images suggest changing courses of the River Sone in past allowed it to join the Ganges near Fathua (Fig 7, Fig 15b). River Punpun was the main stream draining into Ganges near Fathua.
Antiquities of Chechar are well established and the finds suggests the place was once an important Buddhist centre; and probably a gateway to the trade route north of Ganges, connecting Vaishali and further North up to Kapilavastu. Floods and the changing course of the Rivers Ganges and Gandak have washed off the northern shore, revealing many antiquities. Shri Ram Pukar Singh who is working for the preservation and promotion of the heritage of Chechar has collected many of such antiquities in his private museum.
Figure 8- The North Bank of the River Ganges – Temple of Chechar in view 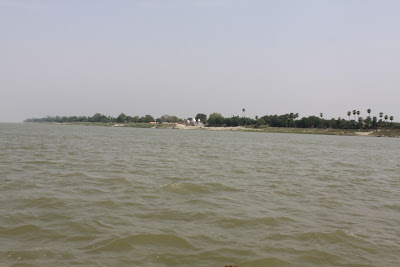 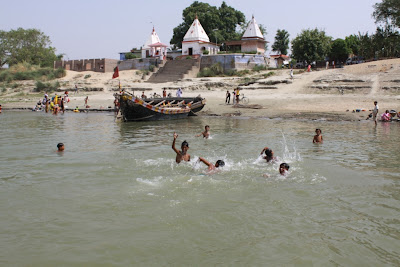 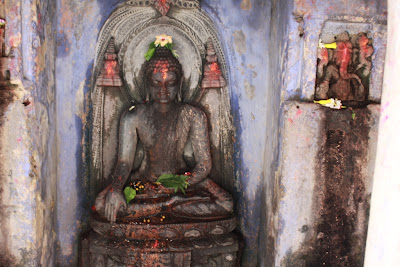 Xuanzang and Fahein mentioned stupas to mark the Parinirvana of Ananda on each bank of the River Ganges by the respective kings of Vaishali and Magadha.  The kings received the half body relics of Ananda and built a relic stupa over them at Vaishali and Rajgriha. Shri Ram Pukar Singh has identified two stupas in the vicinity of Chechar and one of these could be the stupa marking the Parinirvana of Ananda. Both of the mounds are very big and are spread over a large area. The first mound is at Madurapur (85° 20’ 22” E 24° 37’ 49” N). The mound is 80 ft high and is spread over a 2 acre area (See fig. 12). At the top of the stupa mound is a modern temple constructed over lots of bricks dating from the Mauryan Period (2nd century BCE) (See fig. 13, 14). The second probable site for the Ananda Stupa is Bazidpur Mound (85° 22’ 43” E 24° 36’ 39” N) which is also very imposing (See fig. 15).
Figure 13- Madurapur Mound with temple on the top 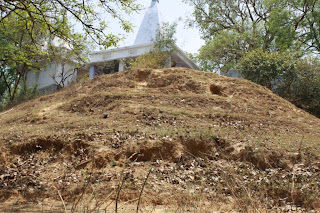 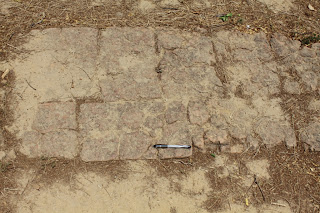 Fatehpur Diar (85° 20’ 28” E 24° 34’ 20” N) the site of Parinirvana of Ananda?
Fahein stated that Ananda attained his parinirvana in the middle of the river while Xuanzang mentioned that it happened in a boat in the middle of the Ganges. Both of the pilgrims wrote about the tradition of the time that Ananda attained Parinirvana in the middle of the river and, probably in a boat as mentioned by Xuanzang. Possibly this corruption of the story stems from it being told over the centuries interwoven with possible myths associated with the basic story of Ananda’s parinirvana. What seems more probable is that Ananda attained parinirvana on the island in between Chechar and Fathua, the two places on north and south banks of the Ganges. The island also called Diar and is a very large stretch of land between Chechar and Fathua which measures 35 km in length and 19 km wide. There are now more than 20 villages on Diar Island. While talking to the people of Fatehpur Village they revealed that the entire island gets flooded during the monsoons but that the Village Fatehpur remains the safest of all the villages of Diar because it is at a higher altitude than all the rest (Fig 16-a, b, c and d). There are no ancient antiquities on the surface to suggest ancient habitation; however, at the house of Shri Mundrika Singh ji, we received an unexpected surprise. He showed us some ancient bricks which were found in the course of the building of his house. They reused many of the bricks they unearthed in the process. There were thousands of such bricks some 15 to 20 ft below the surface. The size of the brick is 14” X 7.5” X 4.25” (fig 18, 19 and 20). The size of the brick and the depth of the find suggest these to be ancient bricks but further study is needed. It also suggests that a brick structure, most likely a stupa or something similar is buried deep in the earth. The location is in the exact path between Chechar and Fathua. Centuries of silting by successive floods have buried an ancient past, most probably a Buddhist one, and a stupa to mark the event of Parinirvana of Ananda. 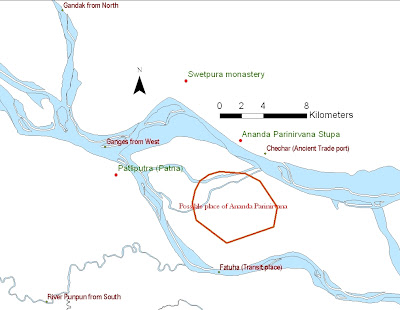 Figure 16-d- The site of Ananda’s Parinirvana on the island; a stupa to mark this event is located at the north bank of the Ganges and the Chechar – Fathua transit points, in place since ancient times
Posted by Deepak Anand at 11:22 AM

yes..we should have the announcement by the government soon...