in 1st millennia CE had many Monasteries where the monks and scholars from , , , and other Central Asian and South-East Asian countries would come to collect true teachings of the Buddha. villages of are replete with ancient remains of this glorious past. Except for all the ancient monasteries are still buried under the layers of biomass. Chinese monk-scholar Xuanzang’s (7th CE) description of was so compelling that Sir. A. Cunningham and other orientalists in 19th and early 20th Century opened the mounds of Bargaon to reveal the remains of for the world to see.


Another monastery in where Ven. Xuanzang made a brief stay and speaks highly of was the Teladhaka Monastery. Research and study based on Xuanzang description have confirmed that present Telhada (telhara) is actually settled over the remains of ancient Teladhaka Monastery.

Cunningham (1862), Broadley (1872), Beglar and others visited the site and all of them mention about a 40 ft high mound at the west end of the village. Broadley reported that he was told images of metal and stone were constantly found during digging of graves. Although he was unable to secure any examples of such imagery at the east end of village there still stands a ruined mosque. This contained pillars recycled from other buildings and an inscription mentioning name “Teladhaka”.

Hon’ble Chief Minster of was appraised about rich antiquity of Telhada. At the instance of Hon’ Chief Minister Shri Nitish Kumar Ji the excavation of “Baladitya Mound” of Telhada started in Dec 2009.


...this building has four halls, belvederes of three stages, high towers, connected at intervals with double gates that open inwards. It was built by the last descendant of Bimbisara- raja. He made much of high talent and exalted the virtuous, learned men from different cites and scholars from distant countries flock together in crowds, and reaching so far, abide in the sangharama. There are 1000 priests in it who study the great vehicle. In the road facing the middle gate there are three viharas above which are placed the connected succession of metal rings with bells suspended in the air; below they are constructed story above story, from the bottom to the top. They are surrounded by the railings, and the doors, windows, the pillars, beams and staircases are all carved with gilt copper in relief, and in the intervals highly decorated. The middle vihãras contains an erect image of Buddha about thirty feet high. On the left is an image of bodhisattva on the right, one of the Avlokietswar bodhisattva. Each of these images is made of metallic stones; their spiritually composed appearance inspires a mysterious awe, and their influence is felt from far. 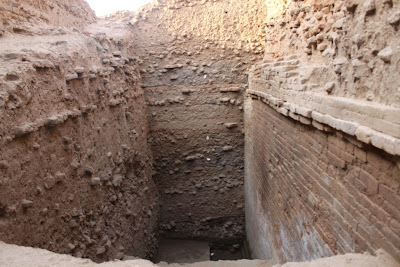 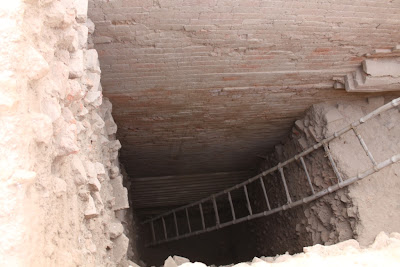 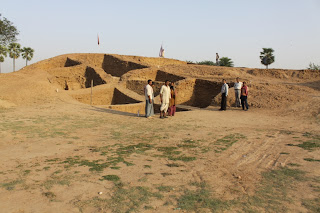 A long Gupta period (4th-6th CE) floor running all across the mound has been revealed by different  trenches. Over the Gupta floor there is debris of 5.5Ft running all around covered with Pala (8th-12th CE) floor. Dr. Verma said that the excavation is in very nascent stage to draw any conclusion but the antiquities found in the course of excavation is very revealing and unique. The Gupta period wall is 6ft broad and a Pala wall is running over it all over.


Telhada is a very promising site is also evident from the Xuanzang's description and its rich antiquties is also reported by Broadley and Cunningham in 1870's. Telhada needs more excavations at different corners of the village to reveal the complete picture. The village is settled over the mound and villagers have often reported about discovering sculptures in course of removing earth.

One of the biggest challenges shall be conservation of the exposed site. For lack of conservation we have already lost the Gupta period Murals of Temple no 3 (Nalanda) and  the colourful murals from Pala period at the Sarai Mound (Nalanda).

Sculptures found during the excavation:

Telhada is one of the richest sites as far as the sculptures are concerned. Lots of sculptures collected from Telhada by Cunningham, Beglar and Broadley have been placed at National Museum Calcutta (now Kolkotta) and Patna Museum. Many of the best sculptures are presently in private collections in Europe and America.
Many sculptures of all sizes have been found in different layers during excavations. One of the unique find is a broken rectangular panel with detail inscription.


This inscription from late Pala (10th CE) is unique because the donor (of the Inscribed slab) has urged to protect the Monastery/ temple and has used very disparaging word for anybody who tries to do any harm to the establishment. 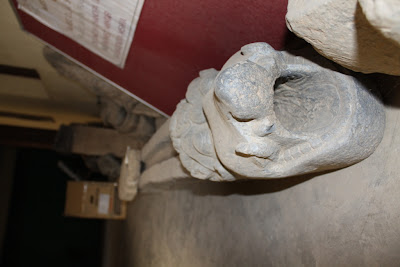 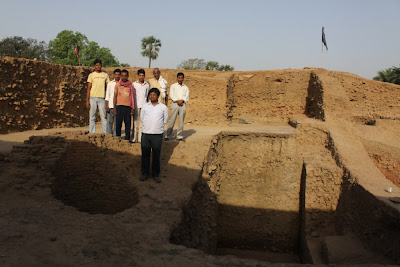 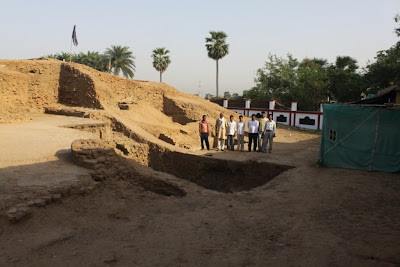 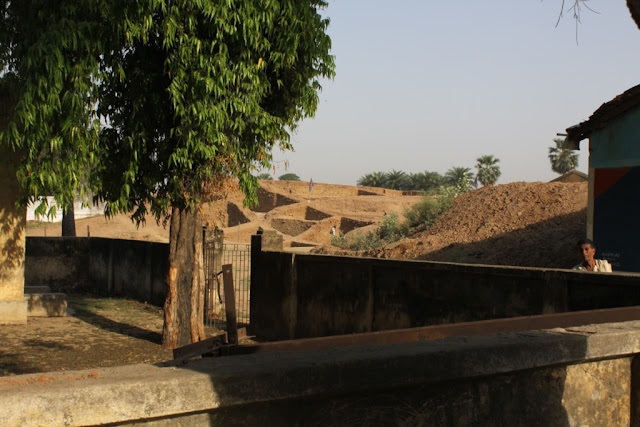 Hi i am priyanka Joshi from Rail Bandhu magazine. I like your photographs and we want to use them in our magazine. So if you are interested them pls contact me on priyanka.joshi15@gmail.com