In the year 1871 Broadley on the basis of the description of Chinese monk-scholar Venrerable Xuanzang (7th CE) identified the Deoghāṭ hill (The Buddhistic Remains of Bihar, A. M. Broadley, p.38) south of Vipulā hill (Rājgir) as Griddhakūṭa (Vulture’s Peak).. Very few antiquities were discovered at the Griddhakūṭa and most prominent among those few was the 91cm, red sandstone image of the Buddha in preaching mudrā (posture)from Gupta period (5-6th CE). This was the only large stone sculpture (See Fig-1) found at the site and most probably the same image that was mentioned by Venerable Xuanzang.

Considering the situation at that time the rich antiquities recovered from Griddhakūṭa were removed to Nalanda Museum (See Fig-2) for safety and display reasons. Griddhakūṭa and many such sacred sites became meaningless archaeological sites sans the images of the Buddha and Buddhist deities that originally belonged to these places. Griddhakūṭa is now a very popular pilgrimage destination for the followers of the teachings of the Buddha all over the world. Griddhakūṭa now receives more than 5 lacs pilgrims each year. It will be in interest of all the stakeholders to restore this ancient image with necessary security precautions and without compromising the archaeological significance of the Griddhakūṭa in order to revive the religious sanctity of the Place. This will facilitate restoration of the religious sanctity of Griddhakūṭa to next level and will send a very positive message all over the world and will facilitate the growth of the pilgrimage. 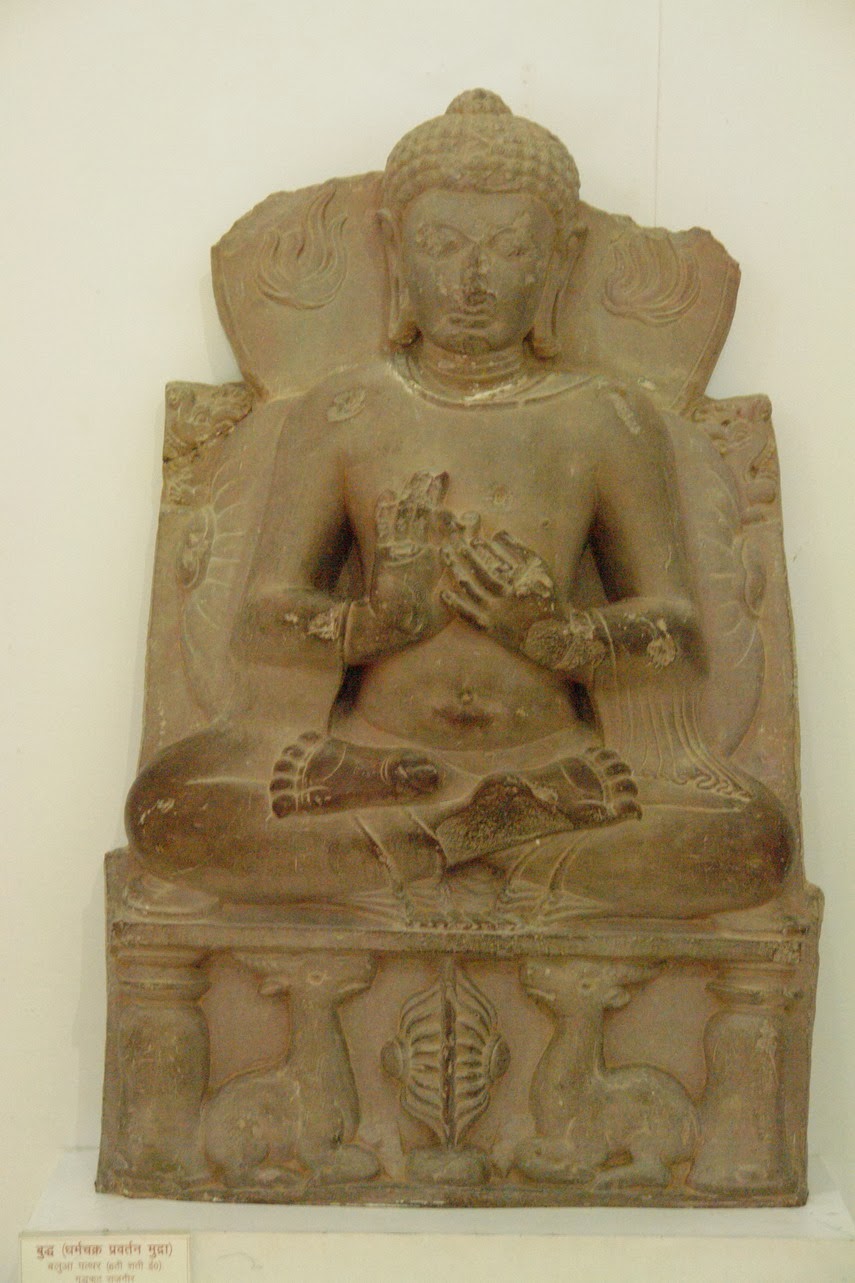 The same image mentioned by Xuanzang

Why these sculptures were removed to Museums


In next few centuries (after 13th CE) all the tangible remains (monasteries, stūpas, temples etc) got buried under the layers of biomass and assumed new names. All the intangible (rituals, traditions, history etc) survived in the Buddhist literature all over the Buddhist lands. In early 19th CE the Buddhist monasteries and institutions actively supported the new set of western explorers, enquirers and translators who were inquisitive about this alien religion. Translation of the Buddhist literature of China, Sri Lanka, Tibet, Nepal and Burma in 18th CE led to the discovery of the Buddhist origin of India. One of the sad fallouts of this revelation was that the orientalists gave a secular treatment to this heritage. These sacred sites associated with the Buddha were given a tag of “Archeological Site” and the sacred sculptures were treated as “Object of Art” and not object of worship. Sculptures and antiquities became a prized possession and westerners started removing all these antiquities to their museums and private collections in Europe and America. With this new treatment the sculptures were not safe at the sites of origin anymore. This led to creation of museums all across the India where the sacred sculptures were placed along with other antiquities.


This “Legal” removal of the sculpture during the British rule continued illegally after the India got freedom. Established networks of national and international smugglers have smuggled many sculptures from villages of Bihar in last few decades. They have spurious ways of creating false provenances for the sculptures so that they could be sold to museums and private collectors all over the World. At the root of the issue is the “Object of Art” treatment to all such religious objects.

Griddhakūṭa Hill (also Gijjhakūta, Vulture’s Peak) is a very sacred place associated with the sublime wandering of the Buddha. It was one of the favourite places of the Buddha and during his stay at Rājagriha the Buddha often came here to practice and preach Dhamma to the Saṅgha. The most important event associated with Griddhakūṭa Hill is when the Buddha after his Enlightenment set forth the Second Turning of the Wheel of Dhamma to an assembly of monks, nuns and laity, as well as, innumerable bodhisattvas. The Prajñāpāramitā-Sūtra-s (The Life of Hiuen-Tsiang by-Shaman Hwui Li - S. Beal, III, p. 114),   Perfection of Wisdom Sūtra-s), the Saddharma-Puṇḍarīka Sūtra (Lotus Sūtra), Sūrāngamasamādhi Sūtra (Records of the Buddhist Kingdoms, By Fahein, Translated by-James Legge, Chapter XXIX), Lalitavistra Sūtra and the Bhadrakalpikā Sūtra all are considered second turning teachings delivered here. The merits that the Saddharma-Puṇḍarika Sūtra hold for the Mahāyāna followers is evident from the fact that a big stūpa was erected at the Griddhakūṭa where the Buddha delivered the sūtra at Griddhakūṭa Peak(Buddhist Records of the Western World, Translated by S. Beal, Book-ix, p, 154). Hidden among the hill’s many caves and rock shelters, history has witnessed many meditating arhat-s including the Buddha’s prominent disciples Venerable Sāriputta, Venerable Mahā Moggallāna, Venerable Mahā Kassaapa and Venerable Ānanda. Identification of meditating cells of Venerable Sāriputta and Venerable Ānanda were made on the basis of Venerable Xuanzang’s description (Buddhist Records of the Western World, Translated by S. Beal, Book-ix, pp. 154-155). On the eve of first Buddhist council at Rājagriha, Venerable Ānanda chose this rock shelter for meditation and became an arhat. The Buddha was very fond of Griddhakūṭa. As mentioned in the Mahāparinirvāṇa Sūtra it was from this place his last journey of Mahāparinirvāṇa at Kuśīnāra (kuśīnagara) started.
Posted by Deepak Anand at 10:50 PM

Wonderful description of the current vs Tsang's setting of the situation :)

Excellent summary. Photos and illustrations are very helpful. Thanks!