A rare, four feet sculpture of Buddha from Pala period (8th 12th CE) at village Mustafapur was lost in a wanton act of vandalisation. In an unsuccessful bid to remove the sculpture from the temple in the village the miscreants have destroyed the face of the image. Ironically, the village is situated just 1km north of the world famous Ancient Nalanda University.


These sculptures from ancient times are an integral part of the cultural heritage of Bihar. The theft of sculptures from the villages of Bihar has now become a very common occurrence. Many such cases are reported each year but no success in nailing the culprits has led to an increase in such untoward incidents.  Such cases are not dealt with the seriousness it deserves and they are treated as any other petty crime. The scale at which this is happening suggests miscreants at the village and state level is doing it in nexus with the international organized gangs. 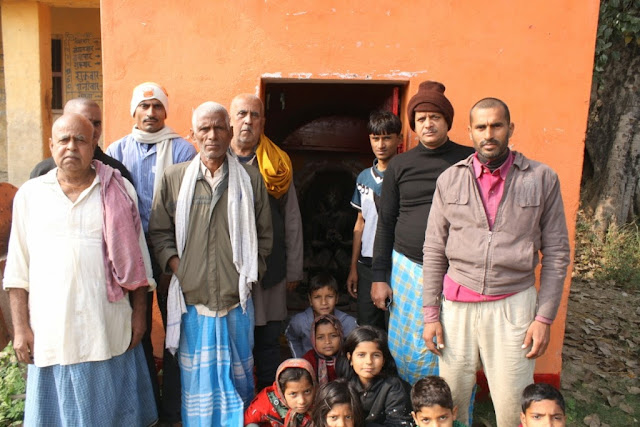 Disappointed villagers by the Temple where the Statue was safely kept

In recent years, bracing to the situation, the communities in villages of Bihar have taken many protective measures for safeguarding the ancient antiquities. But this has to be complemented by Government agencies by bringing the culprits responsible for such wanton act to book. Few years ago a beautiful sculpture was stolen from the famous Bargaon Sun temple near Nalanda.  Criminals responsible for such acts are never brought to book, no example being set, people feel reporting such matters is a waste of time and energy. Heritage volunteers in villages who have been working on heritage related issues are demoralized. An ambience of trust needs to be established by taking some concrete steps.

For many centuries this sculpture was lying in the open. It was an object of worship for the local villagers. In 70's a temporary shed was constructed for its protection. Many unsuccessful attempts were made in 80's and 90's to remove/smuggle the sculpture. To make it more safe, a brick temple was constructed. Two iron grills were put in front of the sculpture and the sculpture to further enhance its safety. But even this it didn't act as a deterrent to the miscreants from making yet another unsuccessful bid to remove it which eventually led to its defacing.   Shri Vijay Singh who since his childhood has been associated with its protection is now a shattered man.

The Government of Bihar is yet to fully realize that these sculptures are an integral part of the sublime wandering of the Buddha and very sacred to the Buddhist all over the world. Bihar being the custodian of this heritage owes the moral responsibility and obligation to protect and safeguard them. Until this awareness comes such incidents will continue unabated and the heritage of Bihar will continue to bleed.
A Signature Campaign Launched
We have launched a Signature Campaign  to generate awareness towards this unacceptable event and ask the Government of Bihar to take appropriate measures to safeguard the ancient antiquities. A State level investigation committee should be appointed to take up all such incidents of theft and damage that have taken place in the past. More stringent laws needs to be framed to ensure the safety of precious antiquities.

very helpful and interesting post. really Buddhist place is a place where people feel the natural beauty of a religious place. TripToWay provides the best Nalanda Buddhist Tours on discounts and special offers.