In order to find where the description reaches us we plot the description of Xuanzang and Fahein on a GIS map. We can start our measurement leg from Lumbini as Lumbini (Rumandie Pillar)( Table 1) is an established site. As we have seen there is no fixed value for “Li” and “Yojan”. Here we shall use two set of values (Maximum and Minimum) for each measure and calculate the distances provided in “Li” and “Yojan” in Kilometers.
For calculation purpose we shall use,
Maximum value for Li = 400 Mts
Minimum Value for Li = 300 Mts
Maximum value for Yojan= 10 Kms
Minimum value for Yojan = 8 Kms

Since Xuanzang has not mentioned distance between the Charcoal tope to Kushinara but has only provided the direction we can safely assume that the Kushinara should be 144 Km to 192 Km plus some Kilometers in East direction from Lumbini (Table-2).

As per the Fahein’s description Kushinara should be between 200 Kms to 250 Kms from Lumbini in its East direction (Table-3).

The calculation for the description of Xuanzang and Fahein suggests that Kuśīnāra should be not more than 250 Kms from Lumbini in East direction. If we see the description of both the pilgrims we find that the whole stretch from Sravasti to Kuśīnāra (See Table-4) was a wild forest, infested with deadly animals and a complete desolate. 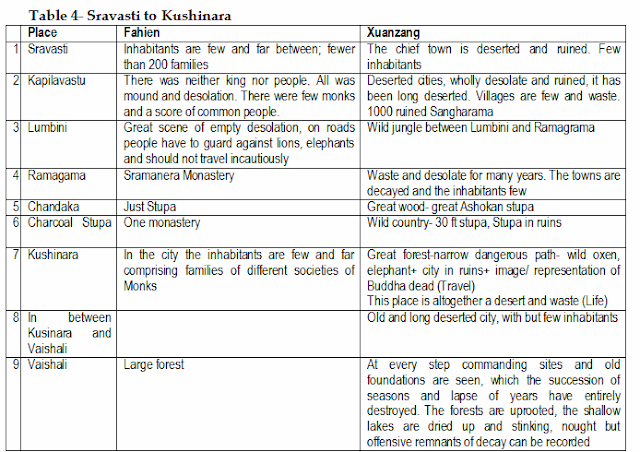 The GIS distance (Straight/Shortest Line) between the Lumbini to Rampurwa is 124 Kms. And we see this value is close to our approximation i.e. 200 Kms. 124 Kms is the shortest distance between the places but as we have seen the ancient paths must be along the established track and pack routes which are definitely not a straight line but must be curved. 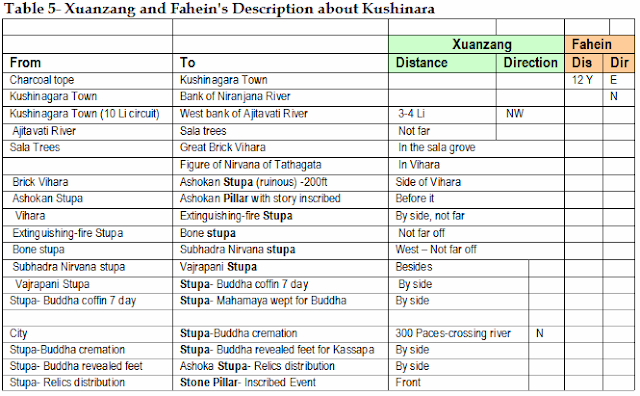 Major highlight of the description about the Kuśīnāra as mentioned by Xuanzang is two Ashokan Pillars separated at a short distance. Rampurwa qualifies for Kushinara for two reasons First is the distance and direction (Route map, fig-1&  fig-2) from Lumbini and Second is the two Ashokan pillars at Rampurwa both confirms the Xuanzang's description.

1) The remains of Rampurwa (From the Published ASI Reports)

Two Ashokan pillars and two mounds near village of Rampurwa were reported Mr. Carlleyle, in 1877. The North Pillar and South Pillar were 850 Ft apart, fallen, broken and submerged in layers of earth and sand. The Northern pillar was buried in morass and only 3ft was protruding above the surface. The southern pillar was 6Ft standing above the ground broken in two pieces without any trace of the broken parts. Excavations were carried out at this site in phases starting in 1877 by Carlleyle. Two years later Mr. Garrick was deputed he did some digging around the northern pillar and drove shallow pits into the centres of the two mounds. First systematic excavations were carried out in 1907-08.
Northern pillar is 44ft 9.5In (Length) exclusive of Capital, 3Ft thick at top and 4Ft at the base. The Lion capital is bell-shaped style and is 6.5 Ft high. The capital was broken from the pillar and was discovered 7ft below the ground level on some brick debris. The brick debris was the extension of the floor which surrounded the foot of the pillar. The Northern Pillar is inscribed with Ashokan Brahmi inscription

A floor of Mauryan bricks ( 12.5" X 12.5" X 2.75") was found at the depth of 7ft. From the Mauryan floor (at 7ft) to the ground surface were alternating layers of irregular intervals of layers of sand and soil (above Fig 6).
Southern Pillar
Souther pillar was found to be 6" protruding above the surface. On Excavation a brick plinth was found encircling the Southern pillar at the level (7ft below the ground) of the floor around the northern pillar. The plinth is an irregular shaped structure, measuring 11.5Ft X 9Ft. In the southern half the bricks were of same sizes as that of Northern pillar but smaller bricks in Northern half. The pillar stump measured 12.5Ft from shattered top to level of plinth. The upper portion of the broken pillar was found lying on the brick floor. The broken portion was of 18Ft 4In long. The capital is 6Ft 9In high of which 4Ft is the height of statue crowning it. A figure of Bull surmounts the capital and there was no inscription on the Pillar.

We see that the original surface level of the place at the time of the Mahāparinirvāṇa of the Buddha was more than 7fts below the level when it was excavated (1908). Lack of support in the remote place and inhospitable condition led to just small excavation at Rampurwa. Just a small trench was dug in the centre of the stupa. Venerable Xuanzang has mentioned many stupas in the area surrounding the Pillars. Presently we can see two big stupas at the site. It is possible other stupas were small and are buried inside 7ft of layers of sand and earth.

One point that goes against the Rampurwa is that venerable Xuanzang has mentioned that both the Pillars he saw at Kuśīnāra were inscribed with the respective events that took place at each spot.
But the Northern Pillar of rampurwa is not inscribed and the Southern Pillar has the usual dhamma edicts and no mention of the event related to Mahāparinirvāṇa of the Buddha. This discrepenacy can be explained if more excavations take place at the site.
﻿
Posted by Deepak Anand at 4:24 PM

Fascinating though I could not comprehend all of it. I came across your blog when I was searching for the Rampurva Bull Capital after I had a chance to see in front of Durbar Hall, Rashtrapathi Bhavan.

Unfortunately in the year 2013 the Lion pillar of Rampurwa which was kept at Indian Museum in Kolkata was damaged unintentionally while relocating it.It got completely broken in many parts.It is a great loss for our civilisation.