Shadow cave, Prāgbodhi Hill (now Dungeswari Hill) has a series of stūpas remains running from East to West on its top. The 7th CE Chinese monk-scholar Xuanzang who undertook pilgrimage to these stūpas mentions these stūpas were dedicated by emperor Ashoka to mark the footsteps of Bodhisattva Siddhārtha.  From centuries of neglect, these stūpas are in a deplorable condition and need protection and conservation.
Six years of practice (austerities) at the East bank of Nirāñjanā is an integral part of the Enlightenment of the Buddha under the Bodhi tree (Mahābodhi, now Bodhgayā, on the West bank of Nirāñjanā). The places and events associated with the Austerities (that includes Ashokan stūpas on Prāgbodhi Hill) and the Enlightenment of the Buddha should be integrated and developed into an ‘Enlightenment Zone’.

Pāli accounts maintain that Sujātā offered food to Bodhisattva Siddhārtha on full-moon day of Visākha (Vesāk). After having the food Siddhārtha spent rest of the day in sāla-groove and in the evening, crossed Nirāñjanā (also Nilāñjanā, Nerañjarā) and arrived at the foot of the Pīpala tree (Bodhi tree, Bodhgayā) (A.iii.240; Mtu.ii.136f).  However, the Chinese pilgrim Xuanzang (7th CE) mention that after having the food offered by Sujātā,  once the Buddha gained some energy, he embarked again upon the meditative path in order to achieve enlightenment. He left the immediate vicinity of Senānigāma, the village of Sujātā, in search of a new place to make a fresh beginning. In this way walking seven kilometers in north-easterly direction he arrived at a hill which is now called Dungeswari Hill.  Xuanzang mentioned this hill as Prāgbodhi Mountain, meaning ‘the mountain leading to perfect enlightenment (Beal 1914: 114).’ It seems the sāla-groove of Pāli texts and Prāgbodhi mountain of Faxian (5th CE) and Xuanzang are probably the same place.


When Siddhārtha climbed to the top of this hill, the earth shook, warning Siddhārtha, ‘This Mountain is not a fortunate place for Vajra Samādhi.’ Siddhārtha, while descending, found a cave and as he sat down cross-legged, there was another earthquake. Deva urged him to go further west to the Pīpala tree, perfect for Vajra Samādhi. As Siddhārtha prepared to leave, the dragon of the cave urged him to remain. Siddhārtha, to appease the dragon, left his shadow in the cave and departed (Beal 1914: 114). Faxian saw the shadow of Bodhisattva Siddhārtha in the cave which he says was very bright (Beal 2005: ch xxxi). From the base of the hill, one can see a series of huge stūpas running from east to west, gracing Prāgbodhi Hill. According to Xuanzang, King Ashoka indicated each spot up and down this mountain that Bodhisattva Siddhārtha had passed by erecting distinguished posts and stūpas (Beal 1914: 114).  Xuanzang stated how on the last day of the season of Vassā (a rainy season retreat), religious laymen from different countries ascended this mountain, made offerings, stayed for one night and then returned.
Leaving his shadow in the cave, Siddhārtha was then guided by the deva-s and left the eastern bank of Nirāñjanā, where he had the realization to follow the Middle Path towards the western bank of Nirāñjanā. There ultimately under the Pīpāl tree on the night of Veshākha Pūrṇimā, he attained Enlightenment and became the Awakened One. 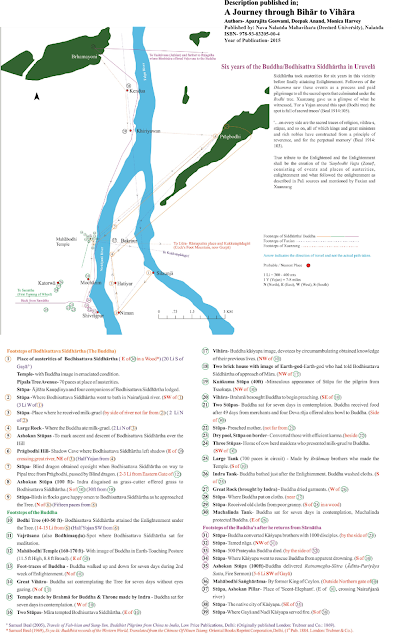 Several new and interesting information about Dhungeshwari and near Bodhgaya area. But very nice work!