Mahāpajāpatī Gotamī (Mahāprājāpati Gautmī) was foster mother of Gautama Buddha. She was younger sister of Mahāmāyā (mother of Buddha). King Suddhodhana married both the sisters, and when Mahāmāyā died, seven days after the birth of the Buddha, Pajāpati looked after the Buddha and nursed him.

After King Suddhodhana, father of the Buddha, died, Mahāpajāpatī Gotamī, foster mother of the Buddha, along with 500 Sākyan women, met the Buddha during his visit to Kapilavatthu (Kapilavstu) and expressed a willingness to join the Saṅgha. The Buddha’s response was ‘no’ (AA.i.186). Mahāpajāpatī Gotamī along with the 500 Sākyan women, who were firm with their resolve to get ordained, traveled to Kūtāgārasālā (Vaiśālī), where the Buddha along with the Saṅgha was residing. They again approached the Buddha with the same request and received the same answer as before. Disheartened but still hoping to find a solution, they approached Ānanda. Ānanda, at his persuasive best, answered all the queries of the Buddha who finally consented to the Bhikkhunī order with some additional vinaya rules for the Bhikkhunīs(Vin.ii.253ff).
Read more about Mahāprajāpatī Gotamī
Parinirvāṇa (Death) of Mahāprajāpatī Gotamī
When Gotamī learnt about the impending parinirvāṇa of the Buddha. She met the Buddha and told, ‘I cannot bear that you quit this world while I am living. I want to die before you.’ Having returned to their monastery, she along with many other nuns sat down to meditate. Immediately Prajāpatī lifted herself in sky, exhibited all the gifts of ṛṣi, traversing in space at will, and emitting rays of light. Her followers did the same. Finally all of them passed from ecstasy into nirvāṇa. It is said that the marvels which attended her cremation rites were second only to those of the Buddha. (Cited from Mahāprajāpatī-Parinirvāṇa-Sūtra) 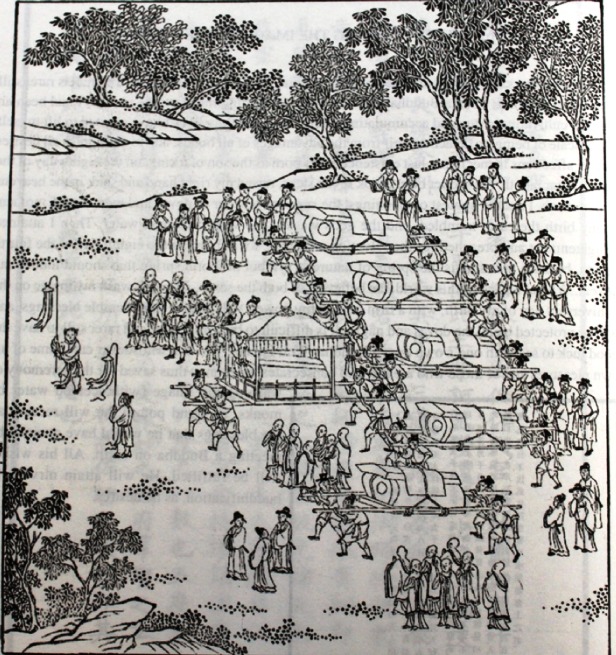 Episode of cremation of Mahāprjāpatī Gotamī  as Illustrated in Ming Woodcuts. [Line drawings from Shih-shis yüan-liu (Origin of the Buddha) compiled from several Sūtra-s by Monk Pao-ch’eng during Ming period(1368–1644 CE)]

Xuanzang paid pilgrimage to numerous sacred places spread out in Vaiśālī. Xuanzang travelogue suggests that during his visit at Vaiśālī he stayed at sammatiya monastery. The places visited by Xuanzang may be broadly clubbed into 6 groups (fig).

Places 1, 3 and 4 are established (Fig.1). Group of places marked 2, 5 and 6 are the most probable location based on circumstantial evidence ( the ancient remains at the place and its location based on Xuanzang’s description).

Read more: Vaishali and around

Is Birpur the site where Mahāprajāpatī Gotamī attained nirvāṇa?
GIS (Geographic Information System) study of Xuanzang’s description for sacred places in Vaiśālī suggests that the place where Mahāprajāpatī Gotamī attained nirvāṇa should be around 1.5 to 2.5 kms (3-4 Li) in North-east direction of Sammatiya monastery. Sammatiya monastery should be in close proximity of Relic Stūpa site (established site). GIS plotting for Gotamī‘s nirvāṇa place takes us to the village Birpur. As a crow fly distance between the probable site of Sammatiya monastery (village Chak Ramdas) and Birpur is 2.5 kms.
With help of a few village elders we reached the south-west corner of village (Birpur) that has a few ancient mounds. Villagers shared how many of mounds were lost in recent years when the earth was removed for the newly constructed railway track.  Removal of earth has also revealed rich archaeological remains in form of pottery, ring wells etc. These finds are spread over a very large area and suggests this to be a habitation place in ancient times.   The pottery found from the mounds has NBPW (northern black polished ware), black slip ware shreds. It is an established fact that NBPW pottery has been dated to 7th BCE to 1st BCE. When the earth was being removed for the construction of the railway track, the villagers saw remains of a long stretch of track, which are probably the remains of an ancient path running north to south (towards Rājā bishāl ka gaḍh).
Nothing can be said with certainty, but all the circumstantial evidence suggests that Birpur should be the place where Gotamī attained nirvāṇa. A scientific exploration by experts and excavations is a must to reveal the significance of the place.

However, until that happens, it’s crucial that the villagers are aware about the importance of the place and they contribute towards the preservation of the ancient remains.   We shared our objective of visit with the villagers. Villagers were very excited to learn the possible association of their village with Mahāprajāpatī Gotamī, Vimalakirti and Āmrāpali. Villagers promised that they will do whatever necessary to protect the mounds and the ancient remains.

Very much appreciate this post--thank you very much Mr Deepak Anand ji!