COVID19 Lockdown- Participating in Relief Work in the Wake of COVID19

I began my foot journey, retracing the footsteps of the Buddha (6th BCE) and Buddhist monk scholar Xuanzang (7th CE, China) on 20th February from Adi Badri, Haryana. After walking for over 530 kms, I arrived at Sankasya (Sankassa, Sankisa) where, according to Buddhist tradition, Buddha descended from heaven.

On 24th March, the government announced a nationwide lockdown to control the spread of COVID19. I was caught completely unprepared. My plan was to finish my entire walk within 6 months not spending more than 2-3 days at any one destination but here I was in Sankisa, facing the prospect of having to be in a village for an indefinite period of time without having a proper place to stay and much to occupy myself with.

However, by good fortune, I met Shri Suresh Baudh and Venerable Upananda, co-founders of Youth Buddhist Society of India (YBS) in Sankisa, who graciously provided me accommodation for the whole duration of the lockdown. Throughout the lockdown period, YBS remained engaged in distributing essential grocery items to families of daily-wage earners in Sankisa and the neighbouring villages. During my 2-month stay at YBS, I joined their staff and volunteers on many occasions in distributing food material among the needy in wake of COVID19.

In the time of the Buddha and during Xuanzang’s travel to India, the Sangha members followed the tradition going out daily on alms rounds to receive food from the laity. Keeping in this tradition, in the time of the Covid 19 pandemic, the monastics and volunteers of YBS are helping to feed the hard hit families.

Although the government has assured food provisions for the poor people in the wake of the Covid 19, the aid is being received by only those individuals and families who are enlisted in government records. In Sankisa and neighbouring villages, a lot of the working population is employed unofficially on daily wages in metropolitan cities like Delhi and Mumbai. Due to the lockdown, these daily wage workers had to return home. As most of them were not entered in government records, they could not be beneficiaries of the government scheme on free distribution of food during the Lockdown period.

Venerable Upananda requested the local government to provide him with a list of people to whom food supplies could be distributed. The government helped in identifying people who needed more help than what the government was providing. YBS also sought help from its members and volunteers in the neighbouring villages to identify people who needed aid. In times of crisis, there are obviously many people who need assistance, however, since YBS had limited resources, they were keen on reaching out to the most vulnerable people such as widows, orphans, elderly, physically challenged and last but not the least, daily wage earners.

During one such relief distribution, I happened to visit a village of snake charmers. There were around 75 families in the village who were traditionally snake charmers. I noticed a group of middle-aged and old women engaged, in the middle of the day, in beating spikes and stems with sticks - they were separating grain from spikes. My curiosity led me to ask them why they were sitting under the blistering sun and doing what they were doing - whether they owned agricultural lands or were engaged in agricultural work. It turned out they did neither. They told me that they collected these wheat spikes and stems, which were leftovers from harvesting, and cooked them to eat. They said they were compelled to do so because the lockdown had left them without work and thereby without means to feed their large families. I was sad to hear this because what they were doing was very time-consuming and even after a whole day’s work, they would only be able to retrieve only a very small quantity of wheat.

During the relief distribution, I observed that many people were uncomfortable collecting the relief material as if their self-respect was being compromised in accepting this charity when they could very well earn it for themselves. However, the lockdown situation left them with no choice but to accept the food aid.

I was touched by the commitment of the YBS team to distribute food even as they themselves grapple with financial difficulties. They are acting purely out of compassion and belief in the interconnectedness of all. I was honoured to be of use in the Dhamma work being done by YBS during my stay at Sankisa.

Some pictures from Relief Distribution 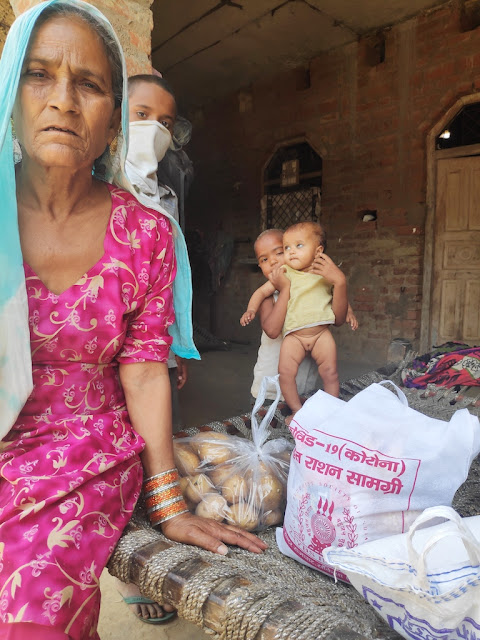 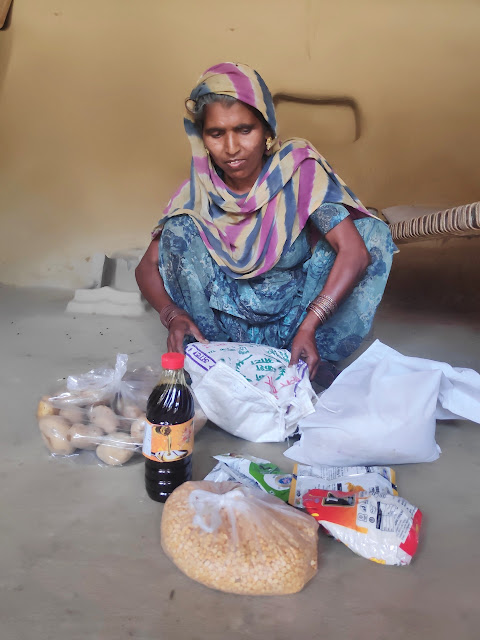 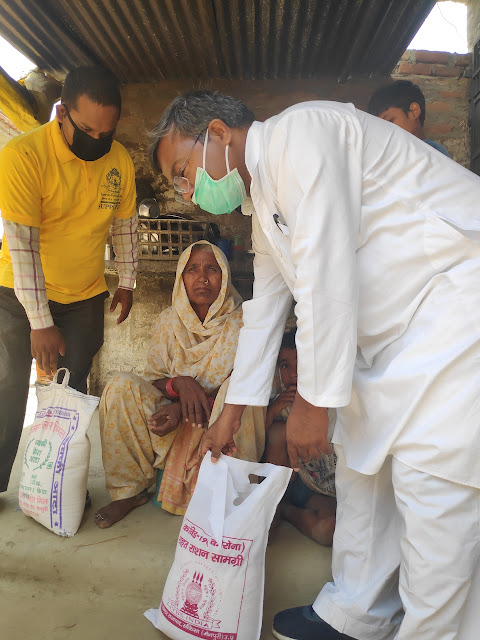 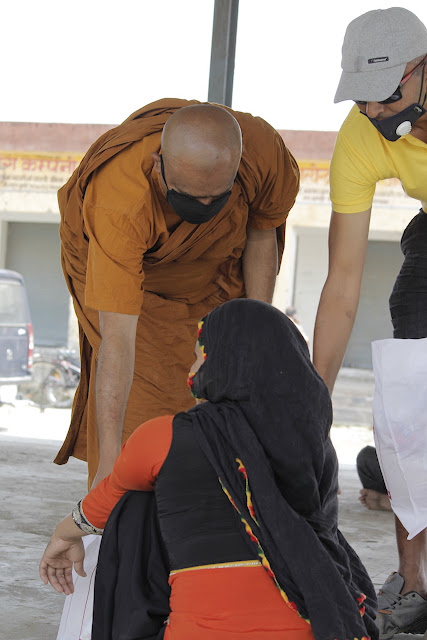 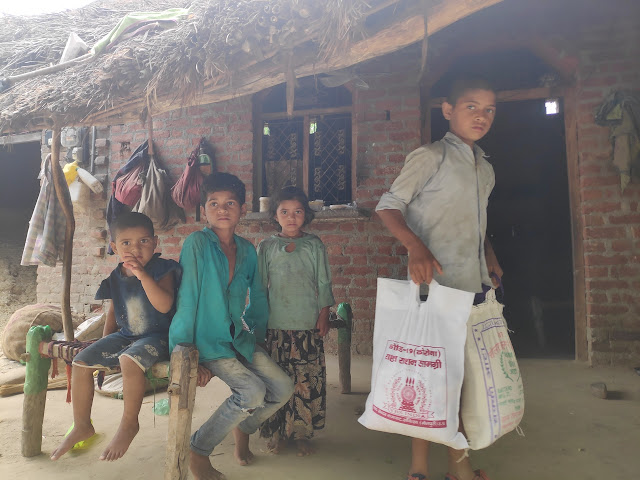 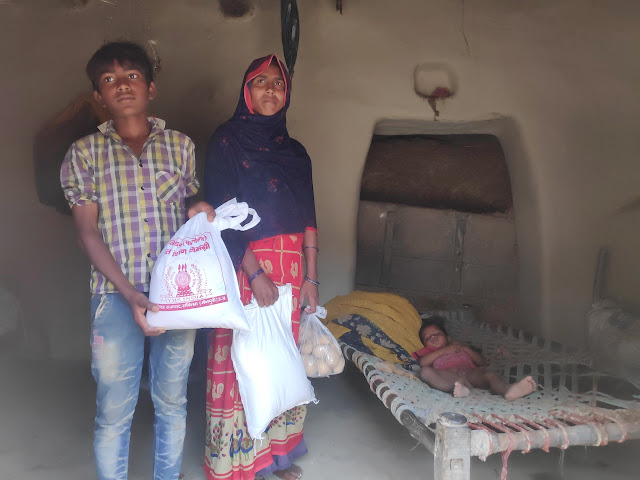 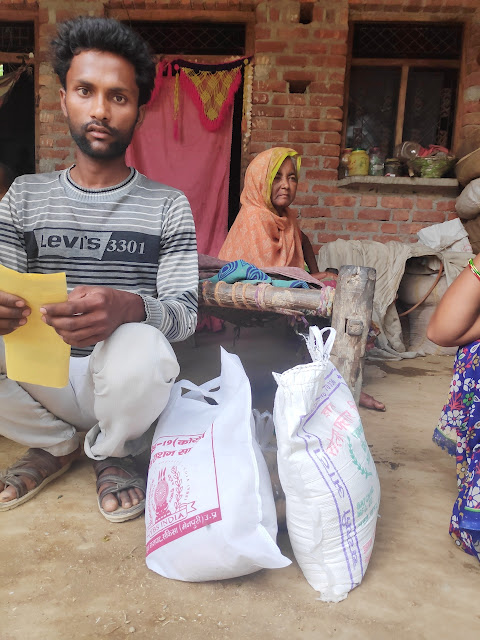 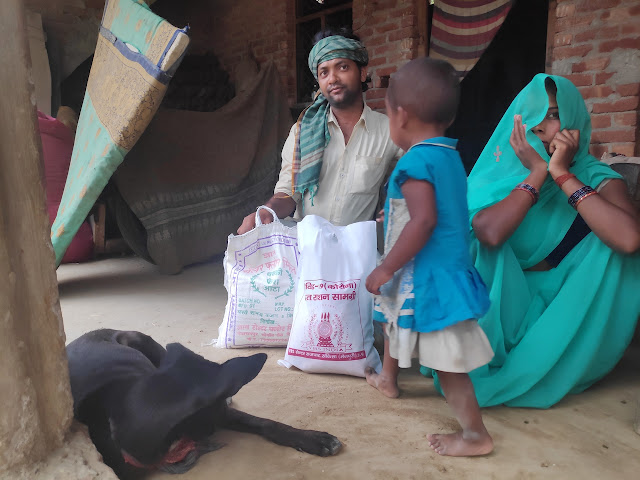 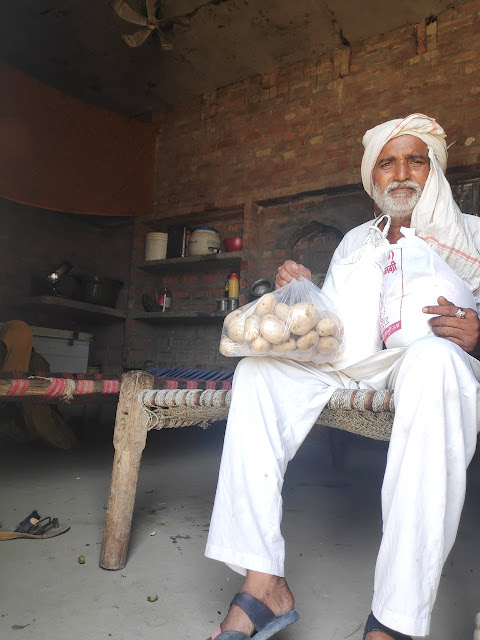 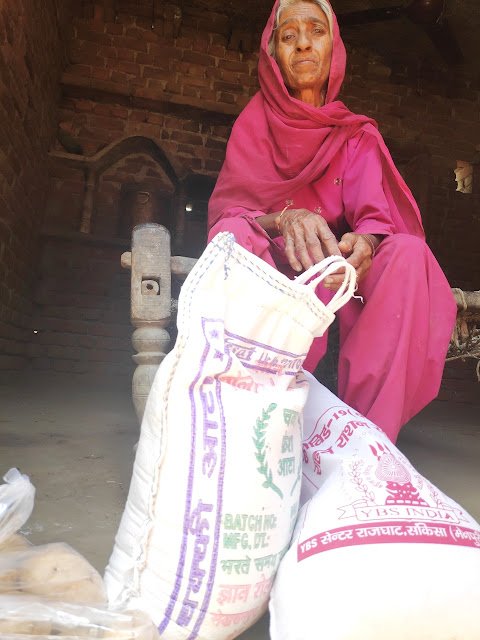 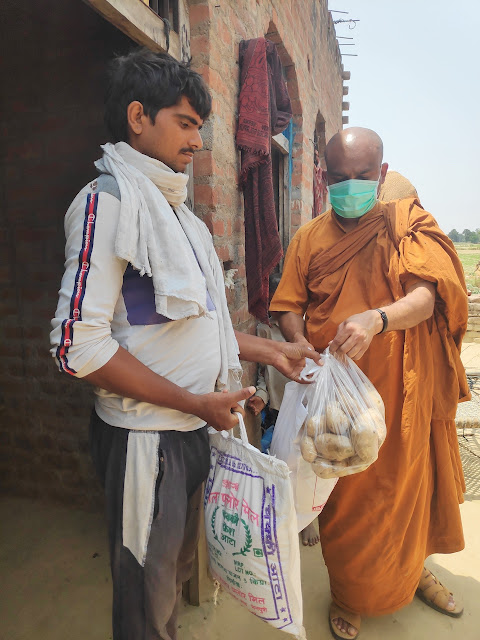 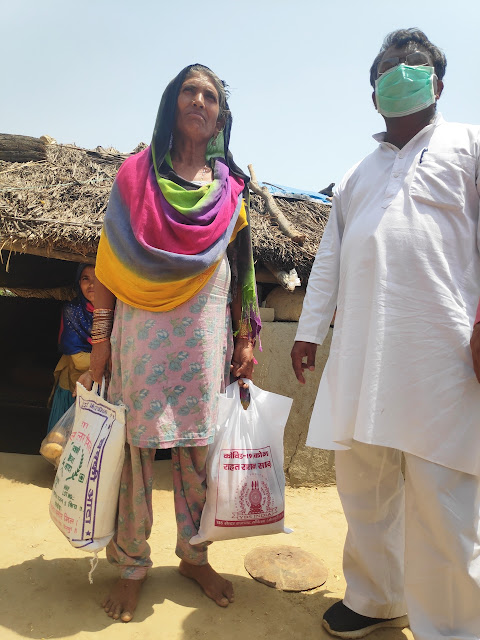 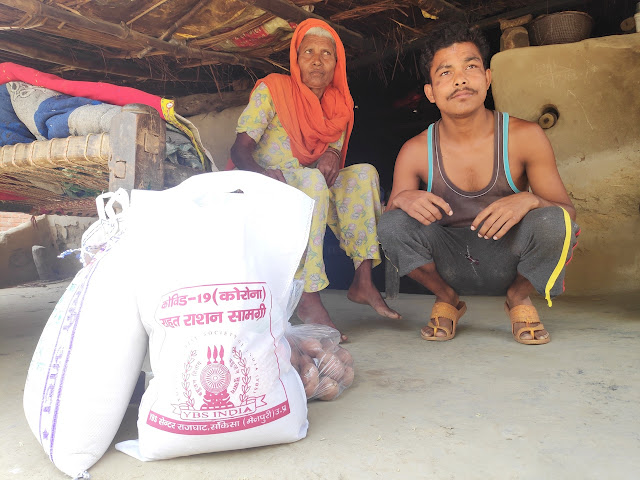 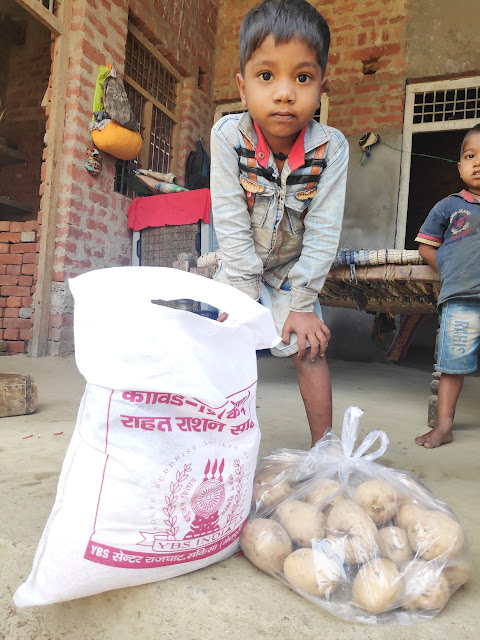 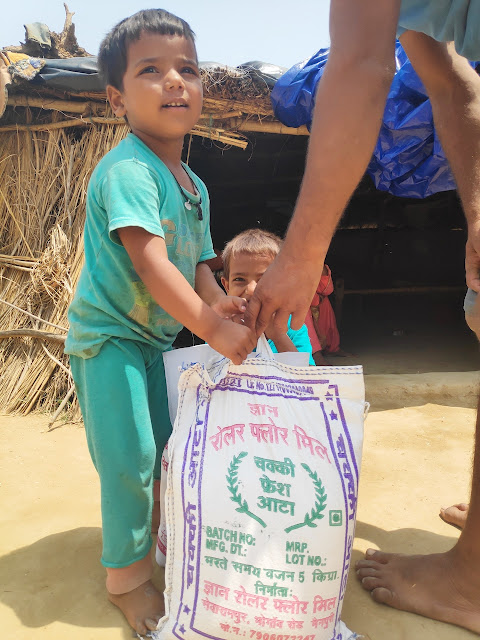 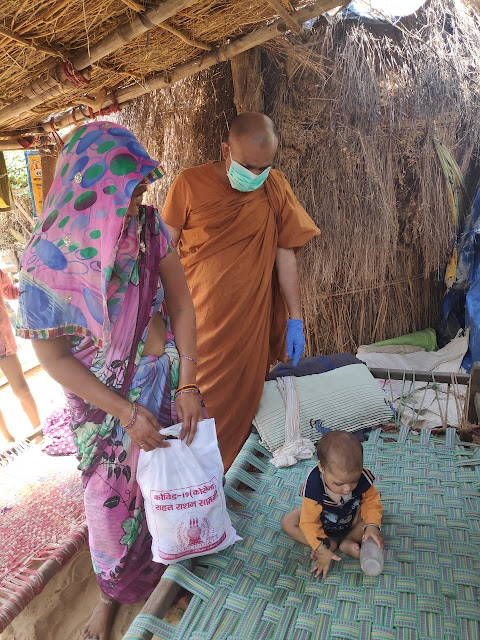 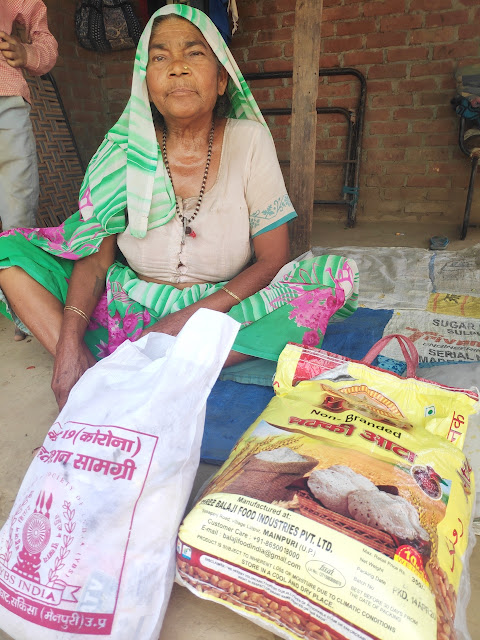 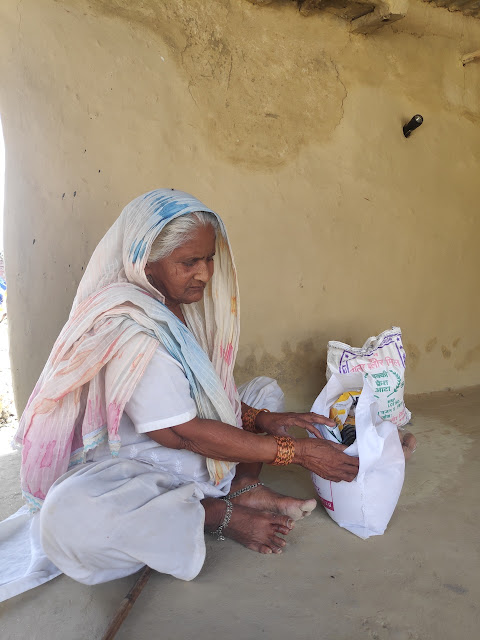 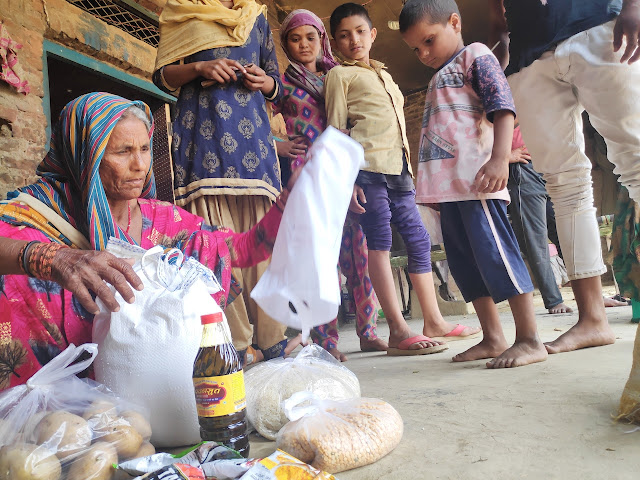 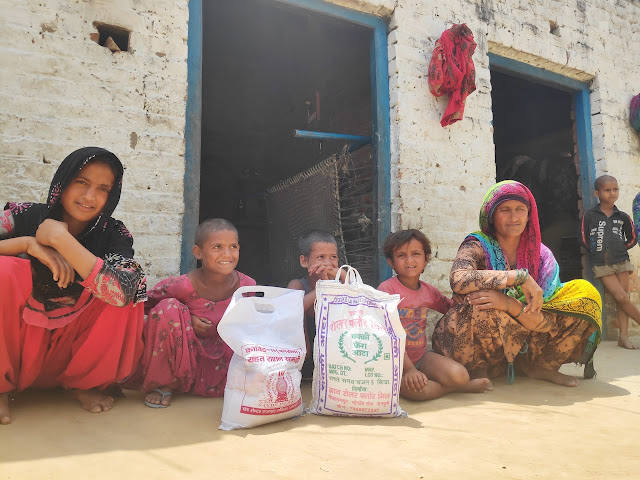 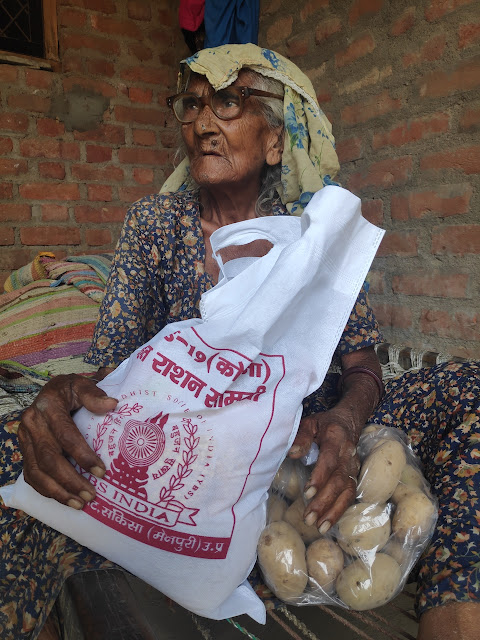