The journey of Xuanzang from China to the Indian Subcontinent and back is documented in two books. The first being his Biography by Monk Huili (referred as ‘Life’) and the second – “The Great Tang Records on the Western Regions”, written under the Emperor's request (referred as ‘Travels’). One thing that has always intrigued me about both the accounts of Xuanzang is the occasional disparity between Life and Travels regarding the routes taken and the places visited by Xuanzang.

The first thing that comes to my mind about such disparities is that Xuanzang felt it to be a place worth a visit; however the circumstances did not favour him. Therefore, he documented the information he could collect for other people.

After walking alone for more than 2500 kms in the Gangetic plains, following the footsteps of Xuanzang,  I can visualise the challenges Xuanzang must have faced about fifteen centuries ago. In spite of all the modern technology, roads and signages, I lost my way many times during my foot journey.  Gangetic plains is mostly alluvial soil which is  sand, silt, and clay in different proportions. This soil is generally covered by tall grasses and forests. Gangetic plains because of its fertile lands have since historic times supported a large population. These plains during the time of Xuanzang were interspersed with small cities and villages. Network of roads and lanes, mostly simple dust tracks interconnected them. Annual floods and changing course by rivers and streams that flow into these plains affected connectivity between different places. Most of the routes may not be permanent all-season routes but seasonal temporary paths without signages as we have now.  In the given circumstances Xuanzang must have faced a number of difficulties visiting sacred traces of Buddha because the sacred traces of Buddha were spread all over the Gangetic plains. As referenced in the accounts of Xuanzang, he mostly travelled from one capital city to another. This would allow him to travel with traders and pilgrims who frequented major cities and centres and were well aware of the routes. This would  also allow Xuanzang to move his belongings and manuscripts and also stay safe from highway robbers. But, he may not have always been fortunate to find such companions; this could be the possible reason why he did not visit Goviṣāṇa. He may not have found any companion at Brāhmapur or Matipura, travelling to Goviṣāṇa.

My walk from Kāshipur to Ahichhatra was affected by intermittent rains. On the third day of my Walk, I got caught in heavy rains in the village chota kāshipur near Rāmpur. One Ram Gopal ji was kind enough to offer me food and shelter for more than 24 hrs in his roadside tea stall.


Walking in alternating wet and dry conditions, I arrived at Rāmnagar on October 11, 2022.  Sir Alexander Cunningham identified remains of a fort near the present day Rāmnagar with ancient Ahichhatra. It was not a difficult task for Cunningham because the ruins of the fort preserved its ancient name (i.e. Ahichhatra) (Cunningham 2000: 255).  Xuanzang has also left a very brief account of his visit to Ahichhatra. His biography mentions only about his visit sans any description about the place and its significance. However, in Travels he has shared some descriptions about the place, its people and religion. He particularly mentions the visit of the Buddha to Ahichhatra. He saw  an Ashokan stūpa  beside a dragon pond outside the city. It was here by  the pond that the Buddha  preached the Dharma for the dragon of this place for seven days. Xuanzang also noted four smaller stūpas near the Ashokan stūpa, built at places where the four past Buddhas sat and walked up and down (Rongxi 1996: 117).

I visited the ‘Chhatr’ mound (28° 22' 37'' N. 79° 06' 48'' E) identified by Cunningham as the remains of the Ashoka stūpa mentioned by Xuanzang. Locals refer to it as ‘Chhatrā’ or ‘Chhattā’. It is situated around 1.5 Kms West of the remains of Ahichhatra fort. I noticed fence wire around the Chhatrā mound  along with the Archaeological Survey of India (ASI) notice board. The fenced compound has one big mound in the centre. It is about 20-25 ft high and approximately 50 mt in diameter. stūpa is in bad shape but the good thing is, it is free of any encroachment.  Cunningham found eight smaller mounds around the central stūpa, of which, four according to him, were the ruins of stūpas of four past Buddhas, mentioned by Xuanzang.  Cunningham believed the remaining  three mounds to be the remains of temples.  I noticed the stūpa mounds one on the south and another on the south-west of the central mound (i.e. Ashoka stūpa) but could not  locate other mounds as the thick vegetation on its east and west was impregnable.

The Chhatrā mound is surrounded by agricultural fields on all sides. A 10 ft wide, 250-300 mts long dust path connects it to Rāmnagar-Shahabād highway on its SW and  road to village Jaganāth on its NE side. A farmer whom I met near the mound referred to Chhatrā mound as ‘Ṭherā’, meaning mound or heap of bricks. I did not find any waterbody or the remains of ‘Dragon Tank’ near Chhatrā mound, as mentioned by Xuanzang. Farmers engaged in harvesting paddy near the mound informed me about one huge water body, Adi Sāgar further NW. According to them, it was made by the Pāndava brothers of epic Mahābhārata fame.  Ahichhatra is mentioned in Mahābhārata as capital of Panchāla kingdom. Draupadi, wife of the Pāndava brothers, was a princess from Ahichhatra.   I walked about 2 kms from Chhatrā mound to reach the eastern bank of Adi Sāgar. On my way to Adi Sāgar I noticed ancient brick mounds, some of them huge, but encroached and damaged. Adi Sāgar lake was huge, but without water, shallow and not maintained. Adi Sāgar is situated too far from the Chhatrā mound to be the Dragon tank of Xuanzang. Cunningham was of the idea that there must be a tank in the immediate neighbourhood of Chhatrā mound, which has now disappeared due to silting over the centuries and encroachment by farmers. I too have the same opinion as Cunningham. 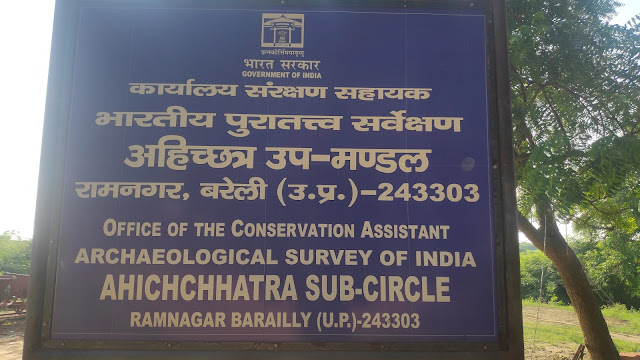 According to Xuanzang, the capital city of Ahichhatra was 17-18 Li in circuit i.e around 6-7 kms. The ‘City’ mound is approximately 6 kms in circuit, which is almost accurate to Xuanzang’s description. The mound is almost 15-20 ft high. One villager guided me through a man-made opening in the wall of the ‘City’ to reach the top (roof) of the mound.  As I climbed on the top of the mound, I could not believe what I was  seeing. There were agricultural fields with crops all over the ancient remains of the capital city of Ahichhatra, as far as I could see. The mound was uneven, undulating and there were ancient bricks exposed everywhere. I was later told that all the agriculture fields were not an illegal encroachment but were allocated to marginal farmers by the Government of India.

I walked to the ASI site office situated in the middle of ‘City’ mound.  At the ASI office, I met Bunty, a MTS (Multi Task Staff) and the only regular employee at the site. He had few daily wage employees to help him take care of the vast site. All along my foot journey, I found that the ASI protected monuments were understaffed. Bunti showed me a beautiful image of the Buddha kept in a godown. The image was discovered from a mound near Nazratganj.  Xuanzang noted the presence of ten monasteries with more than a thousand monks in Ahichhatra kingdom. Cunningham documented few Buddhist remains and artefacts in his explorations in and around the remains  of Ahichhatra city. I am sure, explorations and excavations in future will reveal many more Buddhist remains mentioned by Xuanzang, in and around Ahichhatra.

I didn't visit the Katāri Kherā and other potential Buddhist  mounds documented by Cunningham. Focus of my foot journey is to document the condition of the (Ashokan) stūpas (Chhatrā mound in case of Ahichhatra) to mark the Buddha Cārikā.

Bunti informed me that the ASI is soon going to start the restoration of the Chhatrā Mound i.e. Ashokan stūpa to mark the place where the Buddha gave sermons. This indeed was encouraging news as one more site related to the sublime wanderings of the Buddha will be on the - ‘In the Footsteps of the Buddha’ pilgrimage map, soon.

Cunningham, A.1871. The Ancient Geography of India - I: The Buddhist Period. London: Trubner and Co.