Xuanzang gives an elaborate description of monasteries, the stupa to mark death of Hansa (Swan) and about the cave where Buddha answered the questions of Sakra, lord of gods. There are references in Pali literature about the south facing cave not far from a Brahmin village Ambasanda (Pali proper name dictionary). The modern Apsadh is 1 mile south east of the isolated hill at Parwati (25° 05’ 07 N, 85° 39’ 04 E).
.

Read more about the Sakkapañha Sutta

The first reported identification of Indrasaila guha was done by Kittoe in 1847. His assistants reached 9 Yojan SE from Pataliputra at Bari Pahari, Bihar Sharif (25° 30’ 14 N, 85° 12’ 16 E), also an isolated hill and mistook it as Indrasaila guha.

Later general Cunningham (Annual Report of ASI, Vol-1, P-16-20 ) identified the Giddhdwar, a cave at the southern face of Giriyak hill (25° 01’ 28 N, 85° 30’ 51 E) as the Indrasaila guha. Though the details given by Xuanzang and Fahien were not supporting his decision he manipulated the data to help him support his conclusion. “GIRIYAK”, as etymologically described by Cunningham is Giri + ek, Giri= mountain, Ek= one, which he concluded same as isolated hill. He further corroborated the direction mentioned by Fahien and Xuanzang to suit his identification. Xuanzang took 58Li touching 4 different places in different direction and finally reaching Indrasaila guha SE of Nalanda. Giddhdwar was also SE of Nalanda but was more south than the Parwati-Indrasaila Guha. Cunningham also took 58Li, but he took single leg in one direction instead 4 in 4 different directions. He identified a wrong place as Indrasaila guha.
According to the local legend there existed a fissure link between the Giddhdwar and top of the Giriyak hill where according to the Cunningham was the Hansa stupa and monastery as mentioned by Xuanzang.

Broadley(The Buddhist Remains of Bihar by A.M. Broadley, P-53) also took an attempt for identifying the Indrasaila guha; he said same as Cunningham did few years before. Broadley took his leg from Chandi-Mau, Sariputra birthplace as per him. Broadley took a close look at the fissure and found that the fissure was not connected with top of the hill as per the local legend.

Cunningham, Broadley, Beglar and Bloch visited the Parwati isolated hill and the cave. They associated the hill with the Pigeon monastery mentioned by Xuanzang which is actually further east. 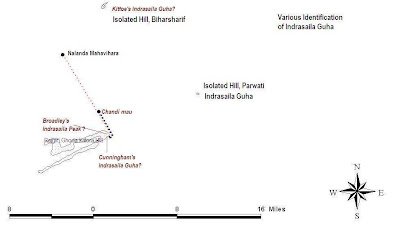 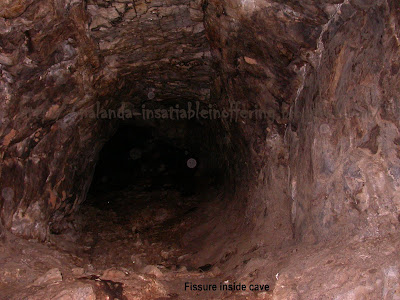 
Thank you, Deepak. I looked at the table of identified sites. Is the site for Indasala Guha mentioned as isolated hill near Parvati the one that we visited? How as it "accepted"? I would very much like to know, as I feel a little part of the process :-)
Regards to you and Dr Panth
Bob

ya this is the same indrasaila guha we visitied. among all the identification of Indrasailaguha the one at Parvati is the true one. the reason being as per the Pali commentary the guha is south faced and is near a abrahmin village Ambsandha (mordern Apsadh) and the village is still there with lots os archaeological treasure.

and it falls exactly at the place mentioned by fahein and xuanzang. and not to ay the two stupas mentioned by xuanzang are still there.

look forward to more participation. and it would be nice if the queries are posted on the blog itself. this will give opportunities to other to benefit from the discussion.

Where exactly is this place and how to visit? Please tell. Thanks.

dear "shrinked",
the places are near Nalanda.